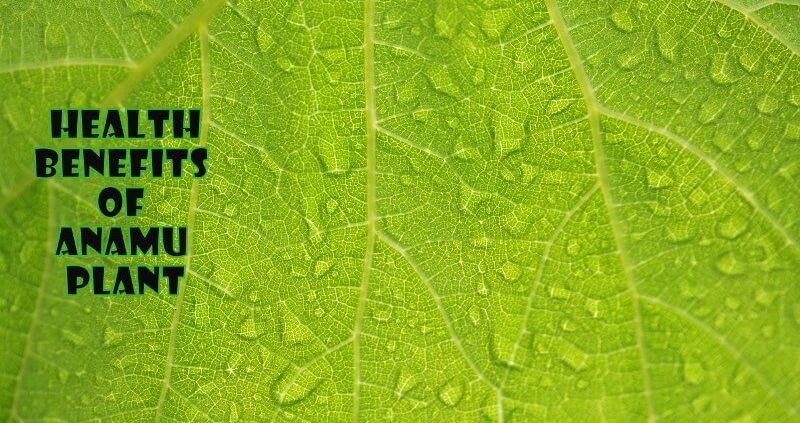 Anamu is known to treat many health issues in Ayurveda. You can use it to treat sexual issues especially in men, to control diabetes, to enhance your beauty, etc. The health benefits of Anamu plant are many.

It has a long history in herbal medicine in all of the tropical countries where it grows. The herb works miracle to boost your immune system too.

To know more about this miraculous herb and the health benefits of Anamu scroll down.

Anamu is a perennial herb plant of family Phytolaccaceae Genus Petiveria and Species alliacea. It grows up to one meter in height. It is native to the Amazon rainforest and tropical areas of Central and South America, Africa and the Caribbean. It yields dark green color, leathery leaves that lie close to the soil.

It also has tall spikes lined with small white flowers. It is sometimes called “garlic weed,” because the plant, and especially the roots, have a strong garlic smell.

Two phytochemicals in this plant, astilbin, and dibenzyl trisulphide have been detected to kill the cancer cells directly. The research also showed that these compounds were able to differentiate between healthy cells and cancer cells, killing only the cancerous cells.

Since this herb can increase immunity, it can prevent cold and flu.

4. For Defense Against Fungi, Bacteria & Viruses

It contains a variety of sulfur-containing chemicals that are responsible for its garlic- or onion-like odor. Modern science has started to analyze some of these compounds and provided some proof in backing traditional claims of this herb for treating infections.

The biologically effective compounds are present at much higher concentrations in the roots than in the leaves. Extracts made from fresh macerated roots were found to inhibit the growth of a variety of fungi and bacteria.

This plant is also effective against those causing food-borne illnesses, genital infections and respiratory disorders, according to a study paper published in a March 2006 issue of the “Journal of Ethnopharmacology.”

This plant’s leaves can be chewed to make teeth stronger and to prevent tooth decay.

Anamu is a traditional remedy for arthritis and rheumatism, and clinical research has confirmed its pain-relieving and anti-inflammatory effect. Its extracts can even relieve pain and inflammation when applied to the skin.

It is a totally natural herb that can help women to regulate their periods. It works by stimulating the blood flow to the uterus and thereby regulating the monthly cycle.However, if you are pregnant or you are planning to conceive, you should avoid consuming anamu herb.

8.Anamu As A Contraceptive

Anamu stimulates the uterus to increase the blood flow. This particular property is applied in Ayurvedic medicine for preventing pregnancy.

You can take this herb for family i.e. preventing pregnancy. However, it can’t be the absolute cure consult a herbalist before taking it as an herb to prevent pregnancy.

The herb has anti-inflammatory properties. The herb can thus help you relive your pain especially the bone and joint pain.

For people suffering from arthritis, the health benefit of anamu can be magical. it effectively reduces the inflammation occurred by arthritis and thereby provide you relief from the symptoms.

There is not much human research done to rule out the effect of anamu on the blood sugar levels. However, the animal studies show positive results.

In one research done on animals, it was seen anamu can control the blood sugar levels to 60% when taken in the right amount and right form. Even the herbalist use the herb for controlling diabetes.

The health benefits if Anamu can help you reduce the oxidativee stress on the body by eliminating the free radicals already present in the body and preventing their formation too. This way this magical herb can help you keep the chronic health issues away.

12.Can Be Used As A Sedative

If you suffer from difficulty sleeping or insomnia or you feel unrelaxed whole day long, you can take anamu. Anamu is an excellent sedative.It can calm down your brain, body, and soul. This will further let you have a peaceful sleep.

If you suffer from any urination issues. You can consume anamu to treat urinary issues.It has some properties to treat ny inflammation or irregularities relating to urine.

Usage Of This Plant

This plant has a long history in herbal medicine in all of the tropical countries where it grows. In Brazilian herbal medicine, it is considered as a diuretic, antispasmodic, menstrual promoter, sweat promoter, and stimulant.

Herbalists and natural health practitioners use it for arthritis, malaria, edema, edema, poor memory, rheumatism. They also use it as a topical analgesic and anti-inflammatory for skin conditions.

Throughout Central America, women use this herb for relieving childbirth pain and to facilitate easy much. It is also used for abortions, many a time. In Guatemalan herbal medicine, the plant is called apacín.

Its leaf decoction is taken internally for digestive ailments and sluggish digestion, fever and flatulence. It is commonly used in the major cities and towns of Central and South America as a natural remedy for treating coughs, influenza, colds, pulmonary and respiratory infections. It can also be used to treat cancer and to support the immune system.

In the Amazon rainforest, this plant is used as a part of an herbal bath which is used to treat witchcraft by local jungle herbal healers called curanderos.

The Caribs in Guatemala used to crush its root and inhale it for treating sinusitis, and the Ese’Ejas Indians in the Peruvian Amazon used to prepare a leaf infusion for flu and cold.

The indigenous people of the Garifuna in Nicaragua also use a sheet infusion or decoction for coughs, colds, and pains and aches. They also use it for performing magic rituals. The root of this plant is thought to be more potent than its leaves.

Some indigenous groups of India beat the leaves into a paste and use it externally for rheumatic pain, headache, and other types of pain. The Same paste of Anamu leaves is also used as an insecticide.

The research published on this plant reveals that it has a broad range of therapeutic properties, including anti-leukemic, anti-tumorous, and anti-cancer activities against various types of cancer cells.

It was found out that water extracts and ethanol extracts of Anamu plant retard the growth of the leukemia cells and several other strains of cancerous tumor cells in an in vitro study by Italian researchers in 1990.

After three years, that is in 1993; the researchers came up with another study, which showed that the same extracts had a cytotoxic effect which means these don’t just retard the growth of cancer cells, but it kills them also.

This study showed that the whole herb water extracts of this plant were toxic for leukemia and lymphoma cancer cells but only inhibited the growth of the breast cancer cells.

More recently, a study published in 2002 documented an in vitro toxic effect against a liver cancer cell line; another in vitro study in 2001 reported that it retarded the growth of brain cancer cells.

A German study documenting its activity against brain cancer cells related its actions to the sulfur compounds found in the plant.

In addition to its documented anti-cancerous properties, it has also been discovered in both in vivo and in-vitro studies to be an immuno-stimulant. In a 1993 study with mice, a water extract stimulated immune cell production (lymphocytes and Interleukin II).

Yet another study published in the same year, that is in the year 1993; it was demonstrated that its extract increased natural killer cell activity (apoptosis) by 100% and stimulated the production of even more types of immune cells (Interferon, Interleukin II, and Interleukin 4) in mice.

Additional research from the year 1997 to 2001 further validated the it’s immunostimulant actions in humans and animals.

This herb’s traditional use as a remedy for rheumatism and arthritis has been substantiated by clinical research confirming its anti-inflammatory and pain-relieving properties.

One research group in Sweden reported that Anamu possesses cyclooxygenase-1 (COX-1) inhibitor actions. COX-1 inhibitors are a new (and highly profitable) class of arthritis drugs that are being sold today by many pharmaceutical companies.

The pain-relieving and anti-inflammatory effects were even verified when an ethanol extract was applied topically in rats, again substantiating traditional use.

Many clinical reports and studies have proved that it shows broad-spectrum antimicrobial properties against numerous strains of fungi, bacteria, viruses and yeast.

In a study published in 2002, this plant extracts inhibited the replication of the bovine diarrhea virus; this is a test model for hepatitis C virus.

A research group of Cuban documented Amu’s antimicrobial properties in vitro against numerous pathogens, including Staphylococcus, Escherichia coli, Pseudomonas, and Shigella and, fascinatingly enough, their crude water extracts performed better than any of the alcohol extracts.

A group of Germany documented good activity against several bacteria like Mycobacterium tuberculosis, many strains of Fungi and Candida.

Its antimicrobial activity was further proved by researchers from Austria and Guatemala, who, in separate studies, in 1998, showed its activity in vitro and in vivo studies against several strains of  bacteria, fungi and protozoa.

While it has not been used widely for diabetes, it has been clinically demonstrated to have hypoglycemic actions.

Researchers in 1990 showed the in the vivo hypoglycemic effect of anemia, showing that Anamu decreased blood sugar levels by more than 60% one hour after administration to mice.

This finding reflects herbal medicine practice in Cuba, where it has been used as an herbal aid for diabetes for many years.

Some Other Names Of Anamu

Many biologically active compounds have been detected in it, including triterpenes, flavonoids, sulfur compounds and steroids. It contains a particular sulfur compound called dibenzyl trisulfide.

At the University of Illinois at Chicago, in a plant-screening program, it was evaluated that more than 1400 plant extracts can be used as novel therapies for the prevention and treatment of cancer, it was one of the 34 plants labeled with active properties against cancer.

The researchers stated that dibenzyl trisulfide was one of two of the active compounds in it with the anti-cancerous property.

This herb also contains the phytochemicals benzaldehyde, coumarin, and astilbin, all three of which have been recorded with anti-tumorous and anti-cancerous properties as well.

Besides its efficacy against harmful organisms, many civilizations have utilized its roots, flowers, and leaves to treat negative health conditions as well as an immune system support.

The reason for such benefits is that Anamu contains tannins and other compounds that are known to have beneficial characters. Also found in many fruits and berries, tannins act as a strong antioxidant that is resistant to redness and swelling.

It has dibenzyl trisulfide, a unique sulfuric compound that has exhibited much antimicrobial behavior in the laboratory.

How To Use Anamu Plant?

Use organically grown Anamu herb, free of herbicides and insecticides and other pollution. Chop the whole plant (leaves, stems, and roots) fine or make a powder of it.

Add one heaping tablespoonful of this powder in 1 liter of hot water and drink the resulting tea on an empty stomach. An average dosage is four ounces (about half a cup) twice daily.

Side Effects Of Anamu Plant