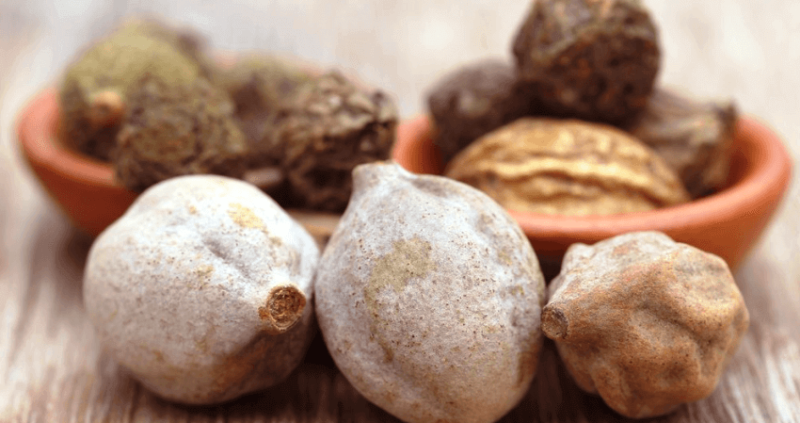 Bibhitaki is a large deciduous tree found across India especially in lower hilly areas. It is also known by the botanical name “Terminalia Bellirica” in the world. In Sanskrit, Bibhitaki is known as “Vibheetaki” in which ‘bheeta’ means fear and ‘Vibheeta’ means lack of fear.

The whole word “Vibheetaki” means the fruit that takes away the fear of disease. In different languages of India, it is known by different names like “Tanikaya, Taadi” in Telugu, “Todikai” in Tamil, “Baida” in Bengali, “Baheda” in Guajarati and Malayalam, “Bahera” in hindi and “Tare Kayi” in Kannada.

It’s the fruit known as Bibhitaki Fruit, Leaves and root are of important value in Indian Ayurveda and are very useful for healing many diseases like asthma, diabetes, constipation, headache, etc.

Bibhitaki Fruit looks like Haritaki Fruit and is one of the three fruits of “Triphala,” and it also helps in maintaining the balance of “Tridosha(humor)” especially Kapha(Water).

Bibhitaki, the wonder medicine has several health benefits, some of them are mentioned below:

Bibhitaki is a very useful remedy for hair fall in the form of Bibhitaki herbal oil. It also prevents Dandruff and Lice infection. Regular use of Bibhitaki oil is good for your Hair.

You can buy it online or make at your home. To make Bibhitaki oil, heat a cup of coconut oil in a pan and add three bibhitaki pods(fruit).

Once it has turned brown and the outer shell cracks, take it out of flame and let it cool.When it cools down, store it in a bottle and use according to your need.

Constipation Patients take it in the form of Bibhitaki Powder with water as a drug dosage to fight with constipation.You can buy it online or make it at home.

To make Bibhitaki Powder at home, take its fruit, remove the seed from it and sundry the peel of the fruit. Take the peel and churn it in the grinder to make a powder store the powder in the bottle and use it with water whenever needed.

Bibhitaki has antibacterial properties making it very effective for treating acne and ulcers. Take bibhitaki powder and boiled water, make a paste and apply it on acne and ulcer spotted skin. It heals acne very quickly and prevents scars from forming.

Bibhitaki is very useful in fighting with skin allergies. It treats skin allergies in the ears and nose caused by earrings and nose ring. Ornaments made of Gold and Silver don’t cause any skin allergy but artificial jewelry made of metal cause allergies and skin rashes.

Bibhitaki Paste is the best remedy for this problem. To make a  paste, take bibhitaki fruit and rub it on sandalwood stone with little-boiled water. After rubbing it against sandalwood, you found light green color paste, take this paste and apply on the infected skin.

It is a very useful remedy for avoiding cough and cold naturally. The dosage of Bibhitaki powder mixed with honey will treat a cough and cold effectively. It also cures gingivitis and sore throat.

Bibhitaki acts as an immunity booster and increases longevity if it’s powder is taken regularly fried in ghee.

Bibhitaki helps in regulating blood sugar levels and decreases insulin sensitivity in the body, so it is a very useful remedy for Diabetes patients.

One more thing as many diabetic medicines has side effects along with regulating blood sugar levels, but bibhitaki do not have any side effects at all.

Bibhitaki is a natural blood purifier. It helps in to removing toxins from the body and keeps the digestive system on track as it contains dietary fibers which help in digestion of food.

Taking bibhitaki in the form of powder daily regulate hunger and combined with a balanced diet and regular exercise will aid in weight loss naturally.

As you came to know about the different health benefits of Bibhitaki, I’m sure you want to buy this wonder fruit, let’s know about where to get it?

Bibhitaki Fruit is very nutritious for a human being as it contains essential vitamins, minerals, and protein. It is a rich source of Vitamin C and minerals like selenium, manganese, potassium, iron, and copper.

According to Charaka(Ancient Indian Scripture), Bibhitaki is the one who keeps you away from the disease, and it is the very useful remedy in Indian Ayurveda because of these ayurvedic properties:

According to Ayurveda, Bibhitaki when combined with other herbal ingredients provide more health benefits, given below are some possible combinations:-

As you came to know, Bibhitaki is quite nutritious, from the above section!

Where To Get Bibhitaki From?

You can buy it from there, or you can buy it online. One Pound of Bibhitaki Fruit costs you around $10 to $15, and its powder costs you between $10 and $15 or more.

Hope you got your Bibhitaki fruit, powder, tablet/Capsule, and you want to know about its dosage?

How To Take Bibhitaki (Dosage)

If you have bibhitaki powder, you can take 250mg-3 grams of powder along with a drink .You can have one tablet/capsule twice a day. Consult your Ayurvedic Doctor before taking this it.

Being Wonder Medicine, bibhitaki also has some following side effects and should be avoided in this cases. Bibhitaki is not recommended during pregnancy as its use may reduce production of Breast Milk. People with a lean body, weak immunity, low strength, excessive sensual activity, fasted for a long time avoid taking it.