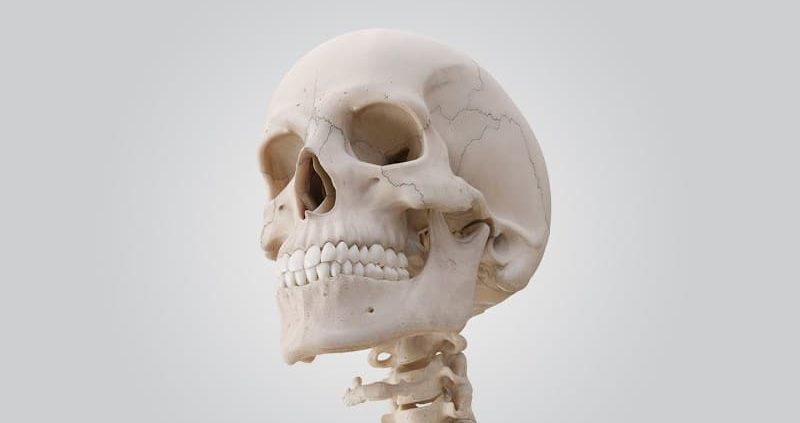 As its names hints, the carotid canal is a channel for the transmission of the internal carotid artery. However, it also transmits the sympathetic plexus from the superior cervical ganglion to the head.

The canal is located within the pyramid-shaped petrous temporal bone. The petrous bone is found at the base of the skull, between the occipital bone and the sphenoid bone.

The carotid artery passes from the neck to the middle cranial fossa through the carotid canal. The external opening of the canal is at the lower surface of the temporal bone.

It then goes upwards in a vertical fashion and bends to continue forward horizontally and medial-ward.

The canal transmits the internal carotid artery and the carotid nerves plexus into the cranium.

In this article, you can find information about the carotid canal, its etymology, its location, and its functions.

The carotid canal is named after the artery that runs through it. This is the internal carotid artery.

Carotid is a word that originates from the Greek “Karos” or “karoun.” Its literal meaning is deep sleep or stupefaction. This refers to the symptoms that a person experiences when the oxygen supply carried by this artery is interrupted, which is fainting or stupor.

The term indicates the importance of this blood vessel when it comes to carrying and supplying oxygen to the brain.

The other word is the canal. This derives from the Latin word “canalis” It means channel, passage, or tube.

The Latin name of the carotid canal is “Canaliscaroticus.”

Description & Location Of The Carotid Canal

The carotid canal is a curved passage that makes way for the internal carotid artery to pass through. The carotid sympathetic nerve plexus follows the artery and also passes through the same channel.

The canal is located in the petrous temporal bone. The inferior end of the channel is oval shaped, and it opens at the lower surface of the petrous bone.

This end is known as the carotid foramen, and it is situated medially to the tympanic plate and anteriorly to the jugular fossa.

It finally ends through the petrous apex. This aperture is superior to the foramen lacerum, in the middle cranial fossa.

The internal carotid artery follows the same path inside the carotid canal, anteriorly to the cavernous sinus. Once it reaches the foramen lacerum, it turns upwards to enter the cranium. The same applies to the carotid sympathetic nerve plexus.

Functions & Contents Of The Carotid Canal

As it name indicates, the carotid canal has the function of letting the internal carotid artery pass through. This artery is present in the interior of the neck, and it passes into the middle cranial fossa via the temporal bone thanks to the carotid canal.

The internal carotid artery is vital for the adequate oxygen supply to the brain, and it can follow a smooth path due to the carotid canal.

The canal starts at the external aperture of the carotid foramen, on the lower surface of the temporal bone.

As described above, it first travels vertically, follows by curving, and finally moves horizontally and medical ward till its internal aperture, above the foramen lacerum.

The carotid canal also gives passage to the carotid plexus of nerves into the head. It lets the sympathetic trunks pass from the superior cervical ganglion into the cranium.

Therefore, the functions and contents of the carotid canal can be summarized as follows:

The carotid canal makes way for the internal carotid artery to pass through.

But later the segmentation proposed by Bouthillier was universally and clinically accepted.

Bouthillier’s segments are the following:

Some of these segments have further sub-branches, but not all do.

The segments that have sub-branches are:

It branches into the vidian artery and the caroticotympanic artery.

Also, the cavernous segment also gives rise to branches that arise from the inferolateral trunk. These branches supply the artery of the foramen rotundum and the trigeminal ganglion. They run along certain nerves.

It provides the superior hypophyseal artery and the ophthalmic artery.

This has the anterior choroidal artery, the posterior communicating artery, and the middle and anterior cerebral artery.

The internal carotid artery enters the cranium through the carotid canal. It presents several curves in different sections of its pathway. While crossing the sphenoid bone and the carotid canal, it shows a double curvature that has the appearance of the “S” letter in italic form.

The carotid artery travels vertically to the pharynx, and it then moves to the base of the skull, where it enters the carotid canal located at the temporal bone’s petrous section.

The internal carotid artery has its start point in the superior carotid pyramid. It moves upwards and lays deep below the parotid gland, the stylohyoid, the stylopharyngeus muscles, the styloid process, and the back of the digastric muscle.

It is crossed by the posterior and occipital arteries as well as the glossopharyngeal nerves.

In its exterior, the carotid artery is beside the jugular and the pneumogastric nerve. It surrounds the base of the cranium along with the hypoglossal, glossopharyngeal, and the spinal accessory nerve.

The artery is beside the superior ganglion of the sympathetic nerve, the rectus capitisanticus, and the superior laryngeal nerve.

The branches of the two internal carotid arteries and the basilar artery come together at the brain’s bottom creating a ring made of small blood vessels. This ring is known as the circle of Wills.

The most common pathology of the carotid canal is known as stenosis. This condition is usually caused by arteriosclerosis, which is a generalized word for a disorder in the arteries that makes them hard and thick. Stenosis can affect the common carotid and both its external and internal branch.

Arteriosclerosis can also make fibrous plaques buildup in the interior of the arterial walls, which are composed of hyaline tissue.

They can lead to ulceration, hemorrhage, calcification, thrombus formation, and embolization in case of complications. This requires medication as well as diet and lifestyle changes to treat it.

Other conditions that affect the internal carotid artery include:

Internal carotid artery dissection results from the separation of the two layers of the artery. The supply of oxygenated blood is disrupted, and it may cause a stroke. This is the most common type of stroke occurring in younger patients.

It is caused by disorders of the connective tissue, or traumas due to vehicular accidents, sports activities, intense coughing or nose blowing.

The treatment of this condition can be done by antiplatelet therapies, anticoagulants, angioplasty, and stent placement.

If surgery opts, it may consist of a ligation or bypass.

This condition is also known as a false aneurysm. It takes place when the blood is contained in the tissues surrounding an injured blood vessel wall. This disorder can take place inside the heart.

The causes include traumas, arterial dissections, infection, and vasculitis.

The treatment option is frequently a surgical repair.

This is a branching network of intersecting nerves and fibers arising from the spinal nerves and blood vessels.

The sympathetic nerves have several important functions that include:

The plexus contacts with the trigeminal ganglion, the sphenopalatine, and the abducent nerve. Its filaments are distributed to the internal carotid artery wall and communicate with the glossopharyngeal nerve’s tympanic branch.

The presence of the carotid canal is important for the normal functioning of the vessels that pass through it, and thus, an adequate supply of oxygen to the brain.