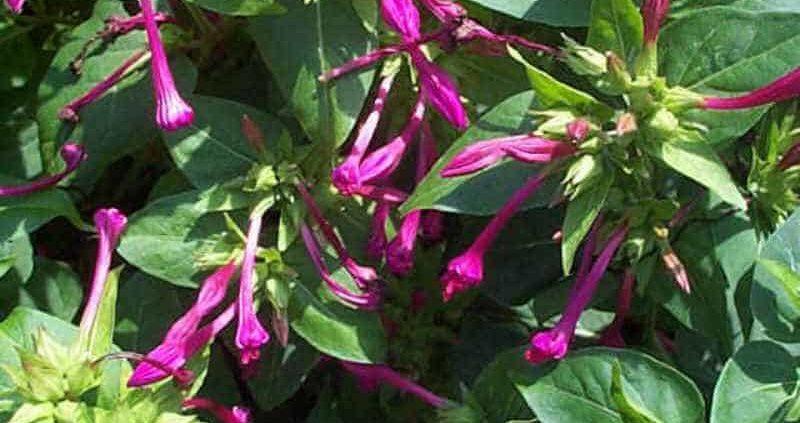 If you wonder what Clavilla is, then you are at the right place. Find out uses, nutrients, benefits, side effects associated with Clavillia herb. Clavillia is a perennial herbaceous plant. It usually reaches from 50 to 100 centimeters of height.

It gives rise to enchanting flowers that bloom at around four in the afternoon. This fact has made them acquire the common name “4 o’clock flowers”.They have a sweet fragrance and they can be of multiple colors including white, red, purple, pink, or multicolored.

The sudden change in the color of the flowers has always been an interesting concept of genetic studies.Due to its fascinating appearance, this herb is cultivated worldwide as an ornamental plant.

However, Clavillia is also known for its therapeutic properties. Its extracts can counteract microbial infections, dysentery, diarrhea, stomach pain, and prevent cancer.

In this article, you can find information about this fascinating herb, its description, its uses, its side effects, and more.

The scientific name of Clavillia is Mirabilis jalapa. It is also commonly known as the four o’clock flower, the Marvel of Peru or Beauty of the night.

The name Mirabilis has the Latin meaning of “wonderful”, and Jalapa is the name of a place in central North America. This herb belongs to the family Nyctaginaceae, and its original place of growth is said to be the Peruvian Andes, from where it was exported in 1540. There it was cultivated by the Aztecs for ornamental and medicinal purposes.

The plant can now be found naturalized in many parts of the world, including regions of America, Europe, Australia, Africa, and Asia. It grows best in tropical conditions.

Clavillia is a perennial herb that reaches a height of up to 2 to 3 feet every season. They are wide and have profuse branches that are oppositely arranged.

The leaves are pointed, long, and petiolate. They measure from 9 to 13 centimeters in length. The roots are tuberous.

The herb is overall striking and sweet-scented.Its flowers are tubular and white, red, pink, yellow, purple, or multicolored. They can also present a streaked or mottled pattern. They tend to occur in groups of 3 to 7.

It blooms in the afternoon around 4 PM and they close by the next morning. Due to this, the plant is popularly known as the 4 o’clock plant.The flowers of the plant have no real petals. The calyx is in the place where the corolla should have been.

The fruit is a small, one-seeded capsule. It is also known as anthocarp. Its seeds are poisonous.

The plant mainly reproduces by self-pollination or with the help of insects and seed dispersal.

Clavillia is considered a sleeper weed or minor weed. It can grow in crop fields outcompeting the indigenous vegetation and appear in other disturbed zones too. It is resistant to droughts and other adversities.

It counts with a particular type of proteins based on amino acids. They are known as mirabilis antiviral proteins or MAPs and they are especially found in the root tubers.

From the flowers, compounds like miraxanthins, indicaxanthin, and vulgaxanthin have been isolated.

Other components that have been found are stigmasterol, oleanolic acid, brassicasterol, rotenoids, B-sitosterol, and ursolic acid.

These properties of Clavillia give it anti-proliferative against tumor cells, as well as antimicrobial and antifungal features.

Clavillia is popularly known as a sweet-scented and beautiful ornamental plant.

However, it is also used worldwide for its therapeutic properties, which are supported by the biological traits of this plant. These include a natural ability to fight viruses, fungi, and other microbes.

The versatility of this herb suggests that more applications and benefits are yet to be discovered.

As for now, these are the various medicinal uses of the plant:

The herb is consumed in the form of root infusion, tincture, tablets or capsules containing the root in its powder form.

Clavillia root tea or infusion can be prepared as follows:

Other Uses Of Clavillia Herb

Apart from its medicinal purposes, Clavillia has other uses too, as follows:

Side Effects Of Clavillia Herb

The plant is beneficial in numerous ways but it should be kept in mind that it has certain contraindications and side effects.

One Should Be Cautious About The Following Facts

Clavillia is a beautiful ornamental plant that has many other uses, especially in the therapeutic field. It can be consumed for the improvement of the health as required, but care should be taken to not to exceed the dosage.