Leptin is the appetite-controlling hormone that is produced by the fat cells in the body. Leptin sends signals to the brain that the body is full.

It lowers the appetite and stimulates metabolism, thereby making a person feel satisfied. Discover the list of foods that increase leptin sensitivity in a natural way.

Also known as the satiety hormone, it curbs appetite when you have sufficient energy to meet the needs of your body. The hormone derives its name from the Greek word ‘leptos’, which means thin.

The normal functioning of leptin ensures efficient metabolic function, the performance of the brain, mood regulation, memory, and coordination.

However, issues with the working of leptin can affect the functioning and overall health of the body.

Leptin is the body’s natural means to prevent us from overeating and gaining weight.This article would be particularly useful for those who wish to control their appetite and lose weight.

We will look at the functions of leptin, its importance in regulating metabolism, hunger pangs and maintaining body weight.

We will also find out how food can affect leptin levels and explore some ways to increase leptin sensitivity, which aids weight loss.

Here is a list of foods that reduce leptin resistance and increase sensitivity.

This is one of the best types of food to increase leptin sensitivity. Protein helps energize the body and increase leptin levels. This keeps you feeling full for long. Let your breakfast be packed with proteins.

Egg and lean meats rich in protein such as chicken, quail, and turkey, stimulates metabolism and burns many calories as they are digested, and they also help to build up muscles. These should be consumed in moderate amounts and avoid overeating.

Consuming lentils and nuts such as almonds, walnuts, and peanuts daily also increase sensitivity. These are rich in protein and fiber and stimulate metabolism.

These excellent sources of vitamins and nutrients keep you full while adding fewer calories. They are high in fiber and water content. Ensure that you take at least two cups of fresh fruits and vegetables daily. It is better to eat them as whole rather than consuming their juice, to maximize benefits. 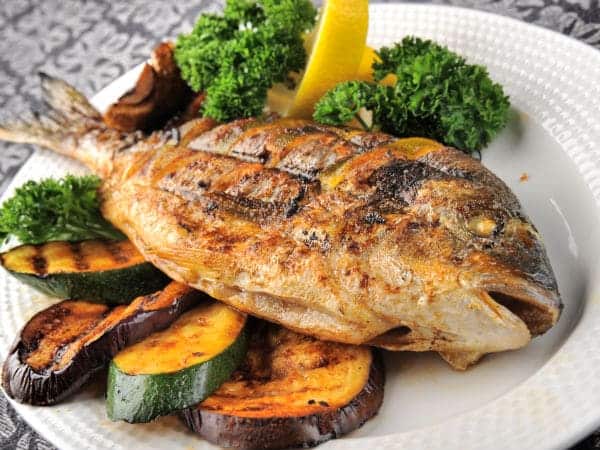 Eating fish can help to deal with leptin resistance. You can include portions of tuna, sardine, mackerel, and salmon in your diet.

Fish contains oils, as well as omega-3 and omega-6 fatty acids that boost metabolism and control energy levels.  These also help to keep the heart healthy and maintain cholesterol levels.

Fish also contain Vitamins A, C, D, and E. It provides you with essential minerals like iodine and selenium, which enhance the functioning of the thyroid hormones and reduce oxidative stress.

Proteins present in fish aid in muscle development, while also helping to burn fat and maintain a healthy weight.

It has been found that most people with leptin deficiencies have a zinc deficiency.

Increasing the intake of zinc through food can improve response to leptin. Some foods rich in zinc are nuts, cocoa, beef, seafood, and pumpkin.

Omega-3 fatty acids can increase leptin production, improve sensitivity and response to leptin. Some natural sources of omega-3 fatty acids are chia seeds, flax seeds, walnuts, fish such as sardine, mackerel, and salmon, as well as legumes like kidney beans and soybeans.

You can also balance your intake with adequate omega-3 supplements.

Grape fruit can reduce insulin levels in the blood. It helps to improve metabolism and burn calories, which also helps to manage body weight.

Green tea boosts metabolism and heart rate, and burns calories. It reduces leptin resistance and has been found to act as a nervous system stimulant.

Spicing up your food can reduce leptin resistance. Peppers contain a compound called capsaicin, which makes them spicy. It boosts metabolism and also helps to burn calories.

Dairy products such as milk and yogurt are rich in calcium, which is good for metabolism and weight loss. They should be used in adequate amounts and avoid excess consumption that may lead to fat accumulation.

Include sesame seeds in your diet to ensure intake of zinc, fiber, antioxidants and healthy fatty acids. These aid in leptin production reduces resistance and, improves its functioning.

Probiotics provide a healthy balance of gut bacteria, which can improve digestion and deal with leptin resistance.

These can enhance metabolism and maintain a healthy weight. Some probiotic foods that you can include in your diet are yogurt, spirulina, and fermented foods like sauerkraut, kefir, and kimchi.

Other Lifestyle Changes For Leptin Sensitivity

Look at a few other things you can do to maintain healthy levels of leptin and increase your sensitivity to this hormone.

a. Cut Down On Sugars

Avoid the intake of fructose and sugar. These inhibit the leptin receptors and hamper its functioning. Also, eliminate the use of artificial sweeteners and refined foods in your diet.

b. Avoid Cutting Down Entirely On Calories

As this may trigger the starvation signal, increasing appetite and making you eat more. Ensure that you get sufficient healthy carbohydrates. Use whole grain cereals, containing fiber and complex carbohydrates to provide energy for the body.

Processed and packaged foods tend to contain more sugar, salt and flavoring agents to enhance their taste. They also add to your calorie and fat consumption.

Lectin binds with the leptin receptors and interferes with its functioning. It can also lead to leptin resistance. Some foods containing lectin are beans, pulses, cereals, and wheat germ.

Insufficient sleep can affect the production and functioning of leptin. Staying up through the night causes a dip in leptin levels.

Ensure regular exercise and make it a part of your routine. However, refrain from severe workouts initially, as it would add further stress to the body, and negatively affecting the leptin resistance.

When the body is stressed, it produces higher amounts of cortisol, which affects the working of leptin. You can try out various options like meditation and yoga to manage stress.

We have seen that leptin plays an important role in regulating appetite and metabolism, and ensures normal functioning. Maintaining healthy levels of leptin could be the key to effective weight loss and energy balance.

How Does Leptin Work?

The leptin from the fat cells enter the bloodstream and is transported to the brain. It reaches the brain through the blood capillaries and binds to the leptin receptors in the hypothalamus.

By means of this mechanism, leptin lets you know that you are full and that you need to stop eating.

Functions Of Leptin Include

The level of leptin in a healthy individual regulates the feeling of hunger and satisfaction, as well as the storage and burning of body fat.

Higher body fat levels imply high leptin levels. Hence, it would be logical that people with more body fat would produce more leptin, which in turn send signals to the brain to control appetite and eat less, to help maintain a healthy weight.

However, a high level of leptin in the blood may also hinder its flow to the brain. In such a situation, the brain is unable to respond to the leptin produced, which negatively affects the feedback mechanism.

This produces cravings and a surge in appetite while reducing metabolism. Researchers are yet to find the exact cause and mechanism of leptin resistance.

Excess leptin reduces the body’s sensitivity to the hormone. Obese individuals have high levels of leptin in their body and tend to be leptin resistant.

High levels of leptin in the body are associated with increased blood sugar and insulin, high blood pressure, and heart disease.

Leptin also enables the body to use fat to run the metabolic activities of the body. This would result in higher amounts of free fatty acids in the bloodstream, also increasing chances of insulin resistance and high blood sugar.

It can also lead to fat accumulation, which further increases the production of leptin, thereby forming a cycle.

Here are a few factors that contribute to leptin resistance:

How Is Leptin Associated With Obesity?

Obese people may suffer from leptin resistance. The brain fails to respond to normal levels of leptin and requires large quantities of the hormone to gain the feeling of satisfaction.

Obese people with leptin resistance also find it difficult to lose weight. As they lose body fat, the level of leptin produced reduces to the normal, healthy level.

However, their brain thinks that the body is being starved and initiates a response to eat more, while the person would actually be consuming more than required.

This fake starvation also stimulates the build up body fat rather than burning it. This condition makes it easy to put on weight while failing to burn the excess fat.

In most cases of overweight people who find it hard to shed weight, there are no issues in the production of leptin.

It is their resistance to leptin that affects its normal functioning and its role in maintaining normal body weight. Obese people require more leptin to control their cravings and hunger pangs.

A. Leptin And Insulin

Foods containing carbohydrates and proteins increase the levels of insulin in the blood. Insulin is a hormone that regulates levels of blood sugar.

A higher amount of insulin means high levels of leptin as well, which then signals the body to stop eating. Both these hormones affect the intake of food.

In healthy individuals with normal levels of metabolism, the insulin levels reduce to normal after the meal and so does the level of leptin.

However, individuals with insulin resistance would have elevated levels of insulin and hence increased amounts of leptin, which leads to leptin resistance.

One way to tackle this condition is to increase insulin sensitivity.

Ensure consumption of carbohydrates according to the energy needs of your body. Since metabolism and energy requirements vary across individuals, you need to find the right quantity that suits you.

B. Leptin And Thyroid

As we have seen, leptin regulates the energy expenditure and fat storage. It also influences the release of thyroid hormones.

Thyroid hormones affect the growth, development and metabolism of the body.

In the situation of leptin resistance, leptin directs the thyroid-releasing hormone (TRH) to lower energy levels to deal with the fake starvation.

This, in turn, influences the production of the thyroid-stimulating hormone (TSH) in the pituitary gland. Leptin resistance can also lead to the formation of reverse T3.

Hence, the brain reduces the metabolism of the body, and this makes it difficult to lose weight while increasing the chances of weight gain.

Low levels of thyroid mean less energy levels and this would make the affected person feel tired most of the time.

Obese people have sufficient leptin in their body. Hence, they usually do not need food or supplements to increase the level of leptin.

Since our body cannot process leptin through the intestines, oral intake of leptin does not have any significant effect on appetite or weight loss.

People with leptin resistance need to increase their sensitivity to leptin that is already present in the body and improve their metabolic activity.  It will eventually help to maintain a healthy body weight.

There are some foods that can increase leptin sensitivity, to ensure proper functioning of this hormone. This would restore normal fat metabolism, appetite regulation, optimize energy levels and help in weight loss.

Effective Home Remedies To Get Rid Of Pupps Rash