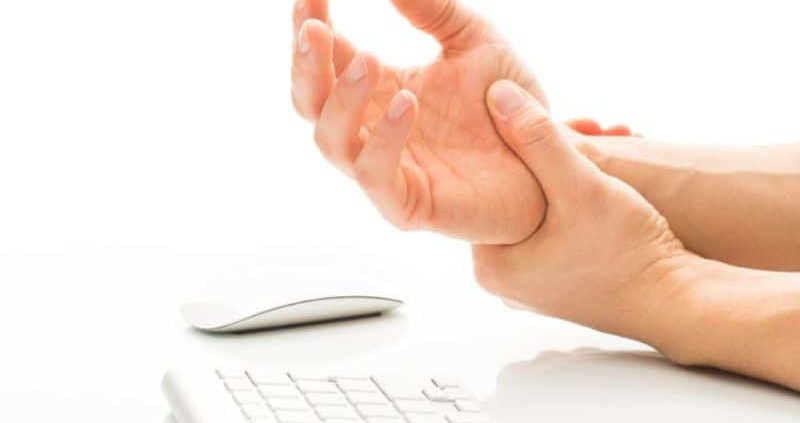 The carpal tunnel is a narrow passage in the wrist for the median nerve and several tendons to run from the forearm to the hand.

Located on the palm, the median nerve connects to the thumb and the first three finger, that is, the index, the middle, and the ring finger. This is the nerve responsible for their ability to feel.

The carpal tunnel syndrome takes place due to pressure, compression, and entrapment of the median nerve accompanied by swelling in the wrist. It can occur in one hand or both the hands, and it leads to numbness, weakness, and tingling in the thumb zone.

In addition, there might be a pain in the nerve due to the high pressure on it and on the wrist, and it worsens with excessive movement of this part of the body. It may even lead to nerve damage.

That is why an early diagnosis and treatment of this condition is very important for the prevention of harmful outcomes.

In this article, you can find information about the carpal tunnel syndrome, its symptoms, causes, diagnosis, and treatment options.

What Exactly Is The Carpal Tunnel?

The carpal tunnel is a narrow canal located on the wrist. It is approximately an inch wide. The upper part of the tunnel is made of the transverse carpal ligament, which is a rigid band made of connective tissue.

The lower part and sides are made of small wrist bones, known as carpal bones. This results in a hard carcass of the tunnel, which makes it rigid and practically devoid of flexibility or stretching capacity.

The carpal tunnel gives way to the median nerve and nine flexor tendons responsible for the movement of the fingers and thumb to travel from the forearm to the hand.

The median nerve is a main nerve of the hand. Its origin is in the neck, from where a group of nerve roots join into a single nerve in the arm and travel all the way from there to the hand passing through the carpal tunnel.

The functions of this nerve are:

How Does The Carpal Syndrome Occur?

The carpal tunnel syndrome takes place when there is increased pressure on the median nerve. This can happen due to the narrowing of the tunnel or the swelling of the tissues that surround the flexor tendons.

These tissues are known as synovium and their usual function is to lubricate the tendons for an easy movement of the fingers. If the tissues swell, it crowds the carpal tunnel affecting the median nerve with an excessive pressure.

This in turn, leads to the carpal tunnel syndrome and its symptoms: pain, numbness, weakness, and tingling in the hand.

When the carpal tunnel syndrome occurs, the parts of the hand that the median nerve innervates are affected. There is a sensation of tingling, numbness, pain, and weakness in the fingers and the hand.

The symptoms might extend to the wrist and the forearm, but they are usually confined to the thumb, the index finger, the middle finger, and a portion of the ring finger.

A distinctive sign of this syndrome is that the little finger remains unaffected even though all the other fingers are.

In the first stages, relief can be obtained by a simple shaking of the hand; the symptoms tend to appear in the night and are intermittent. The condition usually worsens with time if it is left unattended.

The symptoms of the syndrome can be listed out as follows:

i. Numbness of the hand, a sensation of the hand “falling asleep” or shock-like sensations very often.

ii. Tingling sensation and pain in the thumb and first three fingers of the affected hand.

iv. The numbness, pain, and weakness of the hand may lead to the loosening of the handgrip and a frequent dropping of objects or difficulty in simple actions like buttoning clothes.

v. Wrist pain that intensifies in the night due to sleeping positions in which the wrist is bent. This may lead to sleep interruption due to pain.

vi. Pain, burning, and tingling sensation that travels from the hand up to upper parts of the arm.

In the night, the symptoms occur due to sleeping in a position that bends the wrist. The pain may interrupt sleep. During the day, the symptoms intensify while holding an object for a long time (driving, talking on the phone, reading a book) and bending of the wrists while doing some work.

In the first stages of the syndrome, shaking or moving the hands can relieve the symptoms. However, the condition has a high chance of aggravating with time.

The carpal tunnel syndrome occurs due to strain in the wrist that leads to the swelling of the carpal tunnel and the added pressure on the median nerve that passes through it. It is commonly caused due to various reasons. The factors include:

Studies have shown that women and the elderly are more prone to developing this condition. The hormonal changes that are caused during pregnancy can also increase the risk of this syndrome.

The carpal tunnel is a small passage in itself. In addition, it may vary in size within people according to their genetic traits. It may be even smaller and different in space in some people, leading to a higher chance of nerve compression.

The position and movement of the hand and the wrist while doing various activities (typing, driving, holding a phone or a book) for a long time can lead to strain. This increases the pressure on the nerve, especially when the positioning is inappropriate.

In addition, a repetitive pattern of motion that involves extreme flexion of the wrist (like when doing a certain exercise) for a long time also increases the pressure on this nerve, because it affects the tendons and causes swelling.

In some cases of the trauma of the wrist, its swelling may result in the compression of the carpal tunnel nerve.

Several conditions of the health have been linked to this syndrome. These include diabetes, thyroid disorders, rheumatoid arthritis, high blood pressure, etc.

The risk group includes women and older people. Studies have shown that females are up to three times more likely to get this syndrome than males, especially at the age of thirty to sixty years, when the bones start weakening.

It also includes people that have jobs that require the repetitive movement of hands like manufacturing, construction work, assembly line work, typing work.

Other conditions that increase the risk of developing this condition are health disorders like diabetes, arthritis, thyroid diseases, and high blood pressure.

Habits like high salt intake, smoking, sedentary lifestyle, as well as having a high body mass index can also enhance the risk.

How To Diagnosis Carpal Tunnel Syndrome?

The diagnosis of this condition consists in a questionnaire that provides information about:

The next step will be a physical examination to evaluate the present condition of your neck, shoulders, arms, wrists, and hands. This will give an idea about the possible causes of the pressure on the nerve.

It considers signs like tenderness, deformities, and swelling of these parts and the sensation and strength of the hand muscles.

Finally, tests will be performed to confirm the carpal tunnel syndrome. These include blood tests and nerve tests. This has the purpose of measuring the speed of conduction of the nerve impulses. A slower conduction may indicate the presence of the syndrome.

The tests may include:

These tell the doctor about the working of the median nerve and the measurement of pressure on it. The test can determine the presence of any other nerve condition, such as neuropathy.

These are performed to measure the efficiency of signals that travel through the nerves of the arm and hand.

Done to evaluate the possible signs of compression of the median nerve by creating pictures of the bone and the tissue with the help of high-frequency sound waves.

Done to rule out the presence of other bone conditions like ligament injury, fracture, or arthritis by studying the X- Ray images of the bone structures.

These scans provide high precision images of the soft tissues of the bodies to aid the doctor in determining all the problems of the bone.

In mild cases of Carpel Tunnel Syndrome, this may heal without an external treatment with the help of self-care. In cases in which CTS has been triggered by pregnancy, the syndrome commonly disappears within three months of delivery.

On the other hand, when the treatment is necessary, it can be of two types: non-surgical and surgical.

In the majority of the cases, a diagnosis and treatment is necessary to prevent the worsening of the syndrome and its symptoms over time. The earliest it is identified, the higher chances it has to disappear.

It is opted in mild cases of the CTS, when the diagnosis is not confirmed and the symptoms are not too intense. It includes:

It has opted when the symptoms of the syndrome do not reduce after a prolonged amount of time under non-surgical treatment. It depends on the severity of the symptoms and it aims at preventing irreversible damage.

The procedure is called “carpal tunnel release”. As the name indicates, the aim is to relieve the pressure on the nerve. This is achieved by cutting the ligament that composes the upper part of the tunnel to expand its size.

The anesthesia used can be local, general, or a light intravenous sedative inserted into a vein in the arm.

There are two types of surgeries for this syndrome and it is advisable to talk with the doctor in advance about each of them regarding their benefits and potential risks.

A small incision is made on the palm to view the interior of the hand and wrist. The doctor divides the transverse carpal ligament on the roof of the carpal tunnel to increase its size and reduce the pressure that it makes on the nerve.

Later, the ligament gradually regenerates but it does it leaving more space in the carpal tunnel and applying less pressure on the median nerve.

Two incisions (or portals) are made and a miniature camera is used to view in detail the interior of the hand and wrist. The doctor divides the transverse carpal ligament with a special knife for the same purpose as in an open carpal tunnel release surgery.

The most common complications arising from these surgeries include infection, bleeding, and nerve injury.

After the surgery, the doctor will ask you to raise your hand above the chest level and move the fingers in an attempt to reduce swelling and stiffness.

Apart from these, there might be a variable amount of pain and soreness in the palm. It can last from weeks to months.

The strength is recovered within three to twelve months of the surgery depending on the condition of the nerve prior surgery. In the worst of cases, a complete recovery might not be possible. Conditions like arthritis or tendonitis can extend the recovery period.

The doctor might instruct to undergo treatment under a hand therapist and to wear a splint or wrist brace for several weeks and avoid activities that can cause considerable discomfort to the hand.

Recurrence is very rare. In case it happens, additional treatment or surgery will be opted.

There are certain measures that can be taken in order to prevent the occurrence and recurrence of the carpal tunnel syndrome. They are quite simple and they include:

The carpal tunnel syndrome is a condition that requires attention as soon as possible. If neglected, it may lead to irreversible harm and even loss of the functioning of the hand.