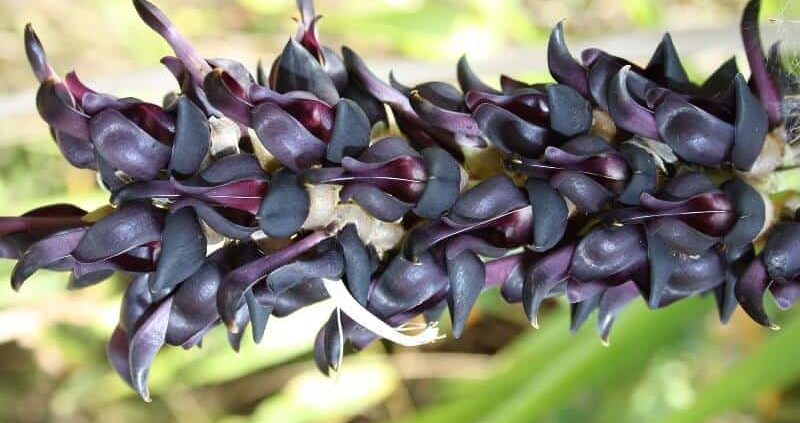 Mucuna pruriens bean is a prevalent Ayurvedic herbal adaptogen also known as velvet bean,which has been used for the treatment of Parkinson’s disease, for treating arthritis, anxiety, parasitic infections, and a condition called hyperprolactinemia.

It is a bean that grows on trees and is very itchy to touch due to serotonin on its surface. The beans are either brown or black color and grow inside a 2-3 inch long curved velvety pod.

Mucuna is considered to be a good source of L-DOPA or levodopa, which is an essential precursor to the neurotransmitter called dopamine.

Increased amounts of dopamine can be particularly helpful for those with low levels, as in conditions involving motor control disorders, seizures, diminished mental focus and depression.

L-dopa is therefore considered a top natural supplement for those with Parkinson’s disease who cannot efficiently produce dopamine in the brain.

It is also well identified for its wide range of unifying, strengthening and all around constructive properties such as helpful for restful sleep, anxiety relief, eliminating addictive drug cravings, increasing brain power, calming the nerves and uplifting the mood. Perhaps it is best known as a potent herbal aphrodisiac.

It is also considered as of the most beneficial herbs for normalizing the Vata Dosha.  In other words, it is a great herb for calming the nervous system and deeply nourishes tissues and fluids of the body. It is one of the rare Ayurvedic herbs that balances all three doshas or body types Vata, Pitta, and Kapha.

This Indian herb is known by many names, some of which are cowitch, cowhage, velvet beans, sea beans, buffalo beans, Kapikachu, Atmagupta, etc.

In the Chinese herbal system, Mucuna is acknowledged as a Yang and Jing herb, that helps to restore the kidney/adrenal systems, reproductive abilities, hearing and cognitive functions.

Mucuna seed with heavy oily qualities is a well known Ayurvedic herb for nervous disorders, working specifically to unify the system and strengthen a weakness.

It’s energizing restorative nature is traditionally used with other adaptogens and herbs often taken as a hot drink with honey and milk in combination.

Mucuna is one of the chief natural sources of a unique amino acid called L-dopa (levodopa), an essential precursor to the neurotransmitter dopamine.

Dopamine is known to calm and relax the nervous system, basically providing a shield and buffer that helps to “dope” up the body against stress.

It is often referred to as the “feel good hormone” and can be naturally stimulated through various gratifying activities like dancing, exercise and pleasurable sexual experiences.

Dopamine may be present in the body but is unable to cross the blood-brain barrier, unlike L-dopa.  Once in the brain, L-dopa converts into dopamine through a process called decarboxylation. L-dopa is metabolized into dopamine by both the heart and brain.

Dopamine is a neurotransmitter without which communication among the nerves within the brain would be impossible. There are several significant diseases of the nervous system associated with low levels or absence of dopamine.

Using mucuna derived L-dopa can be very helpful for any individuals with nerve-anxiety issues, mild to severe neurodegenerative disease or reduced cognitive capacities.

It is an excellent superfood to use for epilepsy or those who have experienced seizures of any kind. Mucuna taken over a long period can help to nourish traumas caused to the brain.

3. The Combination Of Mucuna And Vitamin B6

According to some health experts, mucuna is more effective when taken with vitamin B6 (pyridoxine) which is required for proper production and synthesis of neurotransmitters such as dopamine.

However, it is important to note that Mucuna pruriens benefits have been accomplished in the ancient Ayurvedic system without the use of B6 supplementation.

Additionally, some people believe that combining chlorella (high in B6) with mucuna allows the body to utilize the seed powder more efficiently.  Mucuna powdered extracts should always include at least 15% L-dopa for maximum effectiveness.

4. Mucuna Is An Aphrodisiac

Mucuna is an aphrodisiac that promotes fertility in both men and women, increasing male sperm count and testosterone levels, in addition to regulating ovulation cycles in women.

One reason for this effect is because dopamine naturally enhances the production of other hormones.  It is known to help increase testosterone as well as stimulate the pituitary gland to produce HGH (human growth hormone).

For this reason, Mucuna has become popular as a natural HGH secretagogue and bodybuilding supplement.

Mucuna pruriens benefits have long been acknowledged as a reproductive tonic in Ayurvedic medicine useful for treating infertility and low sex drive, categorized as an Ojas building substance that improves sexual vitality and functioning.

Kapikachhu is also a common component used with other herbs like Ashwagandha, Shatavari or Amalaki in rejuvenation formulas.

L-dopa has also been found to increase sexual interest and activity and to facilitate erections in men.  It is used for treating anorgasmia (a woman’s inability to have an orgasm).

5. Helps In Recovery From Addictive Tonics Or Drug Use

Also, dopamine levels are also depleted by stress, overuse of stimulants, legal and illegal drug abuse and excessive alcohol use.  L-dopa helps to replenish dopamine that is deficient in those recovering from these addictive substances.

When our dopamine is drained, we get overly restless and jittery, which can cause damage to the neurotransmitter production in the brain.

Mucuna pruriens benefits can be helpful for restoring healthy neuron synapses and, as a Jing tonic, could be included in an adrenal rejuvenation protocol after prolonged caffeine use.

Mucuna Pruriens is also beneficial in the treatment of Parkinson’s disease, a condition characterized by a gradual reduction of dopamine in the brain.

Because dopamine is necessary for healthy motor skills and proper nerve functioning, lack of dopamine-secreting neurons, specifically in the “substantia nigra” mid-section of the brain, cause the muscles to tense up and tremble rather than relax, leading to involuntary muscle movements and classic Parkinson’s symptoms.

Because L-dopa can be effectively converted to dopamine in the brain, it is one of the most widely used treatments for Parkinson’s.  The most popular synthetic drug version of L-dopa called Levodopa, is known to come with some side effects that may include nausea, vomiting and headaches.

It is often used in conjunction with the drug Carbidopa to lessen these symptoms but has shown to lose effectiveness when used over a longer period.

The L-dopa in Mucuna pruriens has been recognized in some studies as a safer and more effective alternative for controlling Parkinson’s disease than these pharmaceutical medications.

Mucuna extracts can also be used as a potentially helpful Parkinson’s preventative, nourishing healthy dopamine levels before they get diminished.

This can be a valuable supplement if you have a genetic family history prone to neurodegenerative diseases that involve motor impairment.

We always advocate using vitamins and superfoods in their whole natural state as opposed to highly synthesized pills concentrating just the active ingredients.  There is a wide spectrum of plant alkaloids and other valuable constituents in mucuna that works synergistically to utilize L-dopa effectively.

Moreover, there are additional substances in the herb that may further influence healthy brain function.

A nutrient analysis of mucuna seeds shows about 20% protein, 50% carbohydrates, 10% fiber and 7% crude lipids.  In addition to the main active ingredient L-dopa, Mucuna pruriens benefits also offer small amounts of other constituents such as tetrahydroisoquinoline alkaloids, beta-carbolines, D-chiro-inositol as well as trace amounts of serotonin, nicotine, bufotenine, and DMT.

Some of these components are known psychoactive, but are beneficial in low doses and believed to play a role in enhancing libido, muscle growth and testosterone levels.

How To Use Mucuna Pruriens Bean?

Historically, mucuna proteins have been used as an ingredient with cacao, or raw chocolate, in the Amazon for over 2,000 years.  It adds a nice calming balance to the theobromine and caffeine in cacao for some people who are sensitive to it.

Mucuna powder has also been stirred into hot water for use as a coffee substitute that naturally energizes the body as opposed to overly stimulating it. The Ayurvedic properties of Mucuna are sweet, bitter and hot.

The powder can be mixed with water or juices and blended into smoothies, tonic elixirs, and herbal tea preparations.

Mucuna is also sold in a compressed tablet form to make it more convenient for some people.

B. Mucuna Pruriens Extract Or Powder

Mucuna is available as a powder or powdered cold water extract and should contain at least 15% L-dopa for maximum effectiveness.

Many Ayurvedic herbalists believe that it is best to taste the herbs as a part of the digestive process and the powder mixed in water is a good way to do this.

The mucuna seeds can be tinctured in an alcohol menstruum for use as a liquid extract.