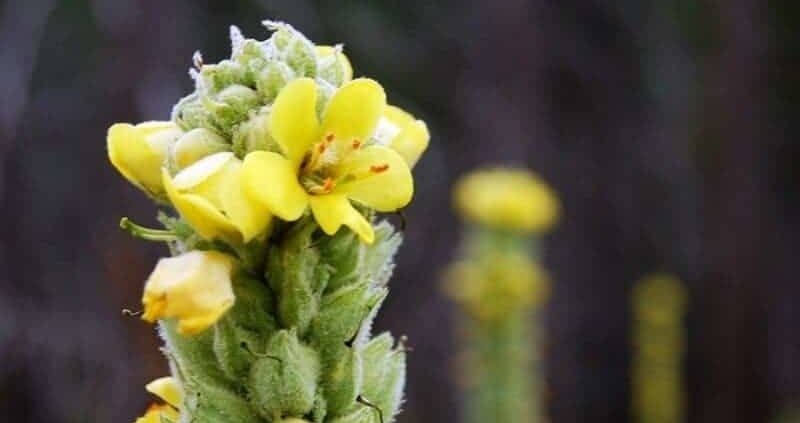 Mullein oil has many health benefits and uses. This is known for its an analgesic, diuretic, antiseptic, disinfectant, febrifuge, anti-inflammatory, expectorant properties.

Mullein is a velvet-leaved plant with its brightly bloomed flower stalk is one of the most easily recognized and well known of almost any wild or domestic medicinal herb. It is also known as Indian tobacco.

Mullein can be viewed as an important guardian plant which has served to create an herbal bridge between the old world and new world healing traditions to the extent that very few herbalists or folk healers could imagine a practice without this beloved and widespread remedy.

You will be amazed to hear that if there’s one thing Mullein is famous for, it’s like oil for ear infections. The warm oil is useful where the wax is causing a blockage or pooling of moisture.

As you might have already guessed by the name, Mullein oil is oil which is obtained by crushing the flowers of mullein.

To be more precise, it is oil which is produced by macerating Mullein flowers in olive oil in a corked bottle, during prolonged exposure to the sun or by keeping near the fire for several days.

The key ingredient of mullein oil, Mullein Flowers, has been known to be a gentle yet effective herbal remedy for centuries.

It is used for piles and other mucus inflammation and also for frost bites and bruises. Mullein oil is highly recommended for an earache and discharge from the ear and for any eczema of the external ear and its canal.

It has been stated by Dr. Fernie that some of the most brilliant results have been obtained in suppurative inflammation of the inner ear by a single application of mullein oil, and that in acute or chronic cases, two or three drops of this oil should be made to fall in the ear twice or thrice in the day.

The analgesic property of this oil has a numbing effect on the nerves. It does not let them sense pain and carry the sensation to the brain, thereby giving relief from pains, such as those of a toothache, headache, cold, sinusitis and others. It does not have adverse side effects on the body.

Clove oil is also an Analgesic oil. It helps in treating toothache and cold.

The mullein oil is Anti-Inflammatory in nature. You will be surprised to know that it can effectively cure any nasal or respiratory tracts inflammation that may result from common cold, fever or inflammation in the digestive system.

The antiseptic property of this oil gives protection to wounds from infections which may cause septic and tetanus. This it does by eliminating microbial growth in affected place and by activating the white blood cells and platelets in the region.

This oil is very efficient in curing both internal and external infections. Internally, it cures infections in the genitals and the urinary tracts, colon, excretory system and the kidneys. Externally, it fights infections on the skin, in the ear, nose and other parts of the body.

Mullein oil increases urination both by frequency and quantity which in turn helps drain out the toxins like uric acid as well as extra salts, water and bile deposited in the body. Urination also helps to reduce weight due to the removal of water and fat through urine.

It also helps reduce your blood pressure, enhances your appetite, promotes digestion and also prevents the formation of gasses in the intestines.

This oil has remarkable expectorant properties. It loosens a cough or phlegm that is deposited in the lungs and respiratory tracts. Furthermore, it also gives relief from a cough, heaviness in the chest, breathing troubles, asthma, bronchitis, congestion and other respiratory disorders.

Fenugreek Oil is also used to deal with respiratory problems.

Mullein oil is also capable of reducing fever by fighting infections that cause fever. The diuretic properties of this oil also contribute to this effect, since the removal of toxins and wastes from the body speeds up recovery from infections.

This oil has magical powers of relaxing muscles, nerves, brain and all other systems. Thus, it works towards giving relief from muscular cramps, nervous afflictions and disturbances, anger, anxiety, depressions and so on.

If you are a patient of chronic insomnia or stress related acute insomnia, then you can benefit from this property of mullein oil. It can give you the most desired thing, a night of sound sleep.

The chemicals present in mullein can fight influenza and herpes viruses and some bacteria that cause respiratory infections. Hence, mullein can cure a sore throat and other infections.

The appropriate dose of mullein depends on several factors such as the users (your) age, health and several other conditions. You must always keep in mind that natural products are not always necessarily safe and dosages can be important.

So you must surely follow relevant directions on product labels and consult your pharmacist or physician or other healthcare professional before using. Tincture, oil or infusion of all or any parts is useful depending on the situation.

Mullein tends to be a fairly low dose herb hence it is safe in nearly all quantity. However, it is strongly advised that adults must consume only 3-7 drops of the tincture a few times a day.

You will be left in wonder if you are made aware of the uses of mullein oil. So why not just take a glance at them over here.

Mullein Oil is also used as a sedative and as a diuretic to increase urine output. Moreover, you can also apply mullein oil to the skin for wounds, burns, hemorrhoids, bruises, frost bite and skin infections (cellulitis).

Mullein flowers are also used in teas to coat sore throats and calm coughing. The leaves are used topically to soften and protect the skin. Mullein oil is a valuable destroyer of disease germs. The fresh flowers, steeped for 21 days in olive oil, are said to make an admirable bactericide.

For all those of you who are troubled by the thought of your body organs being damaged by smoking, here is good news for you.

Mullein tones and soothes irritated lungs and speeds healing of damaged tissues, which could help damaged lungs (due to smoking), recover speedily.

Mullein is one of the traditional smoking herbs as well, which could be used as a tobacco substitute to help smokers quit as well.

Also, it can cure inflammation of airways (bronchitis). However, we require more evidence at present to rate the effectiveness of mullein for this last use.

In a nutshell, mullein oil

The ancient reputation that mullein oil enjoyed in both Europe and Asia of having the power to exercise evil spirits may be attributed to the magic mullein oil can perform on an earache.

Mullein oil is a valuable destroyer of disease germs. The fresh flowers, steeped for 21 days in olive oil, are said to make an admirable bactericide. Also to your amazement, a combination of garlic and mullein flower oil is the traditional oil used for ear infections which are both antibacterial and analgesic.

A combination of garlic and mullein is good for our animal companions. It also works on ear mites and helps control fleas and itching.

You will be pleased to hear that our mullein garlic ear oil formula provides a natural means for addressing ear pain and infection.

A specific product (Otikon Otic Solution, Healthy-On Ltd.) that contains mullein, garlic, and calendula and St. John’s wort for up to 3 days reduces ear pain in children and teenagers with an ear infection.

Since you have read so far, by now you must have analyzed that mullein oil has added another feather in the cap of the uses and advantages of the mullein plant because of its very special ability to cure earaches during ear infections.

Extracting the most of this quality, an effective product for earaches and various other diseases of the ear has been prepared.

Mullein ear drops is a unique combination of homeopathic remedies that are believed to provide quick relief from an earache.

Mullein ear drops help in the drainage of pus or mucus from the ear naturally and regains hearing back. It is very useful for such conditions in children as it gives spontaneous relief from pain and other signs and symptoms.

It shows excellent results in children suffering from middle ear infection.The drops remove dryness of the ear by lubricating with natural oils.

It can naturally prevent your ear and give good hearing power.Camphor Essential Oil is also used for Ear aches as it treats the infected ear quickly

How To Grow Mullein?

Mullein, a wayside weed, is common to clear-cuts, burned areas and partially developed lands in the west, where it often serves to regain biological balance and prevent erosion. The plant prefers disturbed soil, full sun and moderate water.

To grow mullein, you must start in flats and transplant when first leaves appear. It needs light to germinate. You can collect the flowers from 2-year plants as they open. Seeds, however, can be saved for years. Their leaves can be harvested as they appear, in the first year of growth.

Flowers, leaves and buds can be harvested, dried and stored in airtight jars. The flowers can them be later crushed to get mullein oil.

Fresh Mullein flowers can be made into extracts, infused in oil or taken as a tea. However, you can also combine it with garlic in oil and with other herbs in tea for coughs: anise, coltsfoot, marshmallow, and comfrey.

No potent threat has been noted. It is non-toxic and non-irritant. However, mullein oil is possibly safe only when it is used for a short time of period.

After reading this article, I hope you must have come to the conclusion that mullein oil is one of its kinds and has various uses.

Finally, to assure you with the magnificence of the title and the importance of this medicinal infinitely multi-purpose plant, I would quote Tommie Bass, who said, “Mullein is an old-timer.

I don’t think there is any ailment that Mullein wouldn’t give some relief. Everyone should have dried mullein leaves or roots in their medicine cabinet at all times.”