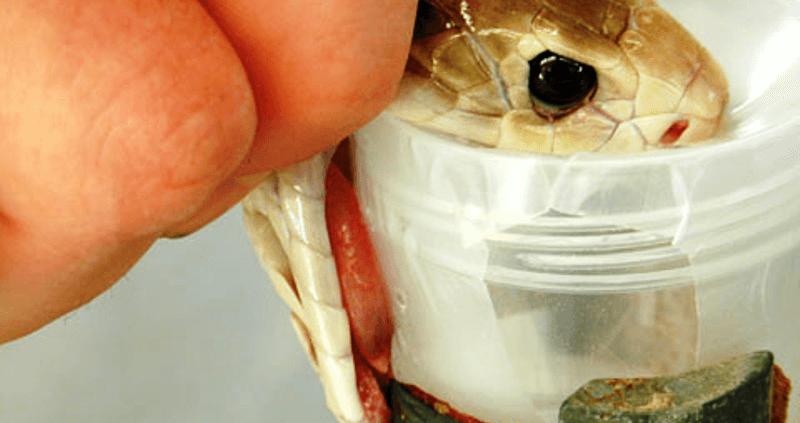 The venom of Lachesis snake is used in making the homeopathic remedy which is extremely powerful.It is used as a remedy to cure several nervous and circulatory diseases and disorders.

As we all know, that the snakes are very poisonous and contain fangs inside it’s body which can cause harm to any living being or even death.

But, the unknown fact is that the snakes are considered as one of the most powerful and the best symbols in the field of homeopathy.

Amongst the snakes, Lachesis is the snake that is useful in the homeopathic field.

It is also known as the Bushmaster Snake in various parts of South America, mainly in the tropical and sub-tropical regions.

Origin Of Lachesis – The Homeopathic Remedy

Lachesis is a snake that belongs to the family of the viper. It is generally found in the Amazon Basin.

It is a creature that belongs to the rainforests that are tropical and equatorial in nature.Lachesis is found in the centre of America as well as in the South.It is considered as the largest as well as the longest viper in the world.

Its length is around three meters and has a massive body with a very short and spongy tail.The head of this snake is triangular in shape and broadens as we see it backward.
It is reddish brown in colour with brown and black coloured spots at the back portion of its body.

It is oviparous by nature that produces eggs and resides in thick forests and bushes.

1) Lachesis mutus is mostly preferred in those situations in which the disorder starts from the left side of the body and suddenly increases once the person awakens from sleep.

2) It is especially useful for those people who are either slim and pale or a little bit of obese or fat.

3) It can also be used for curing of swelled joints or parts of joints in the human body that cause pain during movement.

4) It helps in discharging extra body fluids in the form of sweat that mainly removes all the waste materials from our body.

5) It also increases energy inside an individual’s body and makes the person even more passionate towards his/her work.

6) It is used to relieve stress and tension that provides us with a lot of motivation and encouragement.

7) It makes a person mentally, physically and psychologically stable and healthy and maintains the well-being of the individual.

8) It helps the individual to interact with people around them in order to get knowledge and encouragement that is very useful for a person’s well-being.

9) It is also used for treating various skin related diseases like treating the skin if it becomes dry or can also be utilized for the treatment of a disease known as scabies, which is also a skin disease.

10) It also serves as an antiseptic and can also be used to cure wounds and cuts that can occur in the scalp or any other external body parts.

11) It also reduces the chances or makes the circumstances healthy and helps in preventing the chances of occurrence of diabetes.

12) It also lowers down the body cholesterol and even controls the blood sugar levels from becoming too high or even too low.

13) It also helps in curing several stomach disorders like constipation and also improves the flow of excreta or urine out from the body.

14) It is an effective ingredient in the contraceptives that can also be used in controlling unwanted births diagnosed at earlier stages.

A. Helps In Curing Various Body Disorders Such As

1) It even helps in regulating the pulse rate, heartbeats by making it fast or slow as required according to a person’s condition.

2) It also helps in removing breathing problems or difficulties.

3) It is also effective in curing pain in the ears or in treating bleeding nose.

4) It aids in curing the mental attacks that the patient suffers.

5) Lachesis homeopathic treatment helps in treating the ulcers, various stomach disorders, fever be it low or high or vomiting.

6) It is used as a medication for the gastric or intestinal problems of the body and prevents blood loss in such cases.

7) It can also be used in curing throbbing sensations in the body.

8) It also reduces the cravings for alcohol and helps in reducing its consumption that can cause liver or gastric problems.

9) This homeopathic remedy is used for treating chest pains and various other cardiac disorders.

10) It makes the body resistant towards influenza and diseases like bronchitis.

11) It is used to treat cramps that might develop in the chest.

12) This treatment is also effective for treating distortion in the eyes.

13) It also helps in keeping the jaws erect and placed at their perfect position, also effective in removing tooth problems and toothaches.

14) Lachesis mutus removes false odours from the mouth and gives us a refreshing feeling if consumed in a diluted form that is properly made.

15) The Lachesis homeopathic treatment is used for reducing pains in the facial bones.

16) Lachesis mutus is very effective in removing dryness from the body and prevents it from getting dehydrated.

17) It can even be used for treating swollen, red or even burns in the tongue and makes it smooth, shiny and glazy.

18) The mutus of Lachesis is very effective in the treatment of pain in the abdomen.

19) It also prevents the throat or the mouth from becoming dry.

20) It helps in removing the sensations of irritability or helps when tight clothing or touch is intolerable or causes uneasiness in the body.

21) The treatment of Lachesis that is the homeopathic therapy is effective in decreasing cough problems mainly dry cough or severe cold and headaches that arise due to the cold.

22) It helps in reducing haemorrhages in the nose or in the brain, lungs or even the stomach.

23) It is also used in the treatment of Black fever or the fever that occurs during the time of malaria.

24) Lachesis homeopathic remedy also aids in preventing Tooth Degradation and helps in preventing the formation of plaque in the mouth of human beings.

B. Helps In The Purification Of Blood Present In Our Body By

1) It acts as an anti-coagulant and helps in the thinning of blood which helps in enhancing or increases the flow of blood in the body.

2) It mainly fastens the healing process by removing the toxins from the human body.

3) It is also used to cure swollen veins or nerves.

C. Helps In Improving The Health Of Women Or Even Improves The Conditions During Menopause Stage Of The Menstural Cycle As

1) It helps us to identify easily the menopausal symptoms.

2) It can be used as a remedy for rashes in the lower portion of the body during the menopause stage in women and also prevents conditions such as fainting or weakness.

3) Lachesis is an effective treatment for women who generally undergo heavy menstrual blood flow or pains.

4) It is of great use in the treatment of Premenstrual Syndrome.

5) Not only during menopause but also during the regular menstrual cycle, it can be used as a treatment for curing pains in the lower body or controlling the flow of blood.

D. Helps In Curing Various Skin Injuries Such As

1) It is also used to heal various injuries of the skin, such as bites of the insects or mosquitoes, blisters, sunburns, or wounds that do not heal easily and take time without the clotting of blood in the infected portion of the body.

2) It can even remove the accumulation of pus inside any body part.

3) Skin discolorations can be removed using this homeopathic remedy.

4) The homeopathic medicine is used for treating outbreaks on the skin as well as the rearing of the skin.

5) It is also used in making the lips softer as compared to before.

E. Regulates The Mind And The Body During Mood Swings

1) It helps in removing anxiety or suffocation be it inside a room or outside in the contact of direct sunlight.

2) It helps in overcoming the loss of concentration power and makes the body resistant to restlessness.

F. Helps In Preventing A Headache

1) It removes the pressure that develops inside the head sometimes or a headache that is mild in nature or even if it caused due to contact with direct sunlight.

G. Also Helps In Treating The Throat Infections Such As

1) Symptoms like a sore throat, extreme coughs, irritation of any type in the throat or even pain while swallowing food can be removed using Lachesis mutus.

2) It eliminates irritation that is caused by swallowing or gulping in hot or cold liquids.

3) It contains such enzymes that prevent the throat from choking and even reduces the lumps. By this, it ensures to reduce the chances of tonsils in the throat that give a lot of pain.

How To Prepare Lachesis As A Homeopathic Remedy For Attainment Of Best Results And Treatment Of Various Disorders?

It is prepared from the venom of the snake that is highly poisonous.

For this purpose, the fresh venom of the snake must be used in order to ensure the best possible homeopathic treatment.

It is first diluted in huge amounts of water with lactose. In this way, the final product does not even contain traces of the highly poisonous venom.

It is usually available in the form of tablets or sometimes in liquid form as well.

Fresh air makes the conditions even better for the preparation of this remedy.

It can also be prepared by diluting it in milk and then finally dissolving it in alcohol for even better results.

Side Effects Of Lachesis Homeopathic Remedy

The Lachesis homeopathic remedy is very useful when taken in diluted form.
But, when it is in it’s concentrated form it can cause harm to the body in the following mentioned ways:-

1) It leads to prolonged sleep and causes a major headache.

2) It also causes a lot of suffocation.

3) It can also lead to unconsciousness, and the body parts where it is applied turns black in some cases.

4) This treatment can even lead to anxiety, fear, hatred, feelings of revenge and a lot of confusion especially while taking decisions.

5) It can even lead to loss of weight and even excessive gain of weight.

6) It affects the brain, the nervous system as well as can infect the blood if not taken in proper amounts, and can lead to paralysis.

7) This treatment when not done properly can result in the enlargement of veins that can hamper the growth of our body.

So, as we have seen that the venom of this snake is used as a homeopathic treatment for curing various disorders like stomach disorders, circulatory disorders, respiratory problems, mental attacks, tooth problems like degradation of the teeth and is best suited for the people who are slim or even obese.

It also has advantages like it helps in curing muscular pains or even pains in the teeth or abdomen and even in treating several breathing problems.
It is also effective for women’s health, controlling mood swings and headaches, removing lumps and cramps in the body.

Thus, it can be seen that if the Lachesis homeopathic remedy is taken in proper amounts and is properly made, it can be very effective in treating various diseases and disorders.