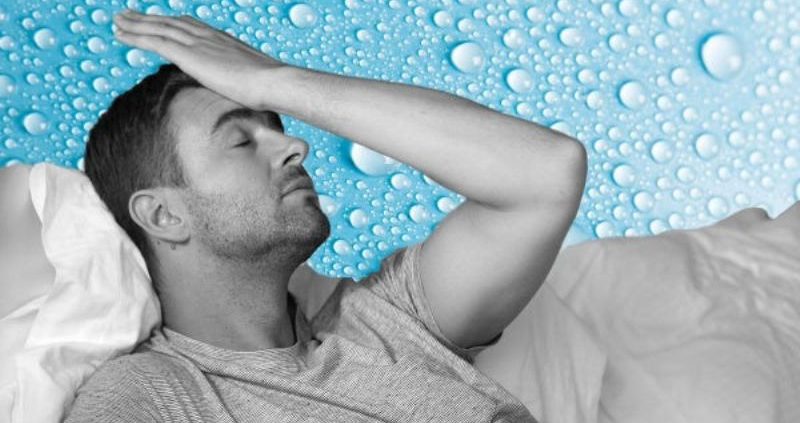 Yes, Night Sweats and cancer can have relations and it can be one of the early symptoms of cancer.

But don’t worry! Following you would discover more about sweat and its relation to cancer.

There is a lot more in the article that will help you to get rid of this disorder.

Night sweats are generally natural phenomenon that takes place due to many reasons. The body controls its temperature in accordance with the surrounding environment. If you are thinking that sudden sweating is taking place at night while sleeping it could be because of multiple reasons.

Especially, if you are staying in India where temperature other than in the months of winter can go up drastically.

Nowadays CANCER is a word that almost everybody is familiar with.

Cells which are the building blocks of our system starts to multiply at a specific region without stopping and spreads around surrounding tissues causing their destruction.

This multiplication of extra cells without stopping causes Tumors.

There can be multiple reasons for night sweating or flushing during sleep.

i. Cancer: One of the main reasons that we would be covering in this article is cancer and sweat as its early symptoms.

ii. Lymphoma is the medical term which relates the type of cancer associated with night sweats.

iii. Menopause: It is a time in most women’s lives when menstrual periods stops permanently. This can be a common reason of sweating or flushing during sleep which is mainly accompanied by menopause.

iv. Idiopathic hyperhidrosis: It is a condition in which the body dramatically produces the unnecessary amount of sweat. Often it gets unrecognized under any medical problems.

v. Infections: Infections has its multiple types amongst which tuberculosis is the infections that can cause extensive night sweating.

vi. Medications: Certain medicines have a physical effect upon its consumption. Sweating is a common phenomenon which takes place after some hours of consuming medicines. Medicines which are taken in case of fever such as aspirin cause flushing during sleep.

vii. Hypoglycemia : People suffering from lowered blood sugar can have severe sweating at Night hours. Medication that includes insulin or oral diabetes medicine may have hypoglycemia that causes sweating.

viii. Hormone disorder : Hormonal disorders have multiple problems around the body, overproduction of specific hormones may result in some problems. Excessive sweating during the sleep should be checked by a hormones medical practitioner.

ix. Neurologic conditions: Autonomic neuropathy is one of an uncommon neurological disorder which could lead to night sweat.

Night Sweat can be triggered by some of the following stimulants:

Other Than this if you are taking some medication, such as :

As we all know “prevention is always better than cure”. But abiding by all of the above stimulants is also not easy. You should always be aware of the triggering stimulants of your problem.

This is a type of blood cancer in the white blood cells in our body who are responsible for protecting us from disease and infections start to act abnormally and divide in a faster pace.

There are two types of lymphomas:

Main sign and symptom of this cancer are severe night Sweat.

Treatments are available for this that is chemotherapy and radiation therapy.

Why Does Cancer Causes Night Sweats?

There are multiple reasons due to which the body react and sweat to keep the patient cooler.

Possible reasons behind sweating in case of cancer:

a. Infection In The Body

This is most common causes amongst other in a cancer patient.

Infections get the body to become warmer and body fighting against it causes immense sweating in the person.

Your body never stops and the antibodies keep on fighting against the foreign cells and bacteria that tries to enter our body.

In the same way in a cancer patient, the body continuously fight against cancer which causes unusual sweat.

Ups and down in the hormone level can bring sudden changes in the mood and body of a person.

Extreme Night sweat can occur because of treatments that cancer patients go through such as chemotherapy, radiotherapy, surgery and hormone therapy etc.

What kind of doctor you should consult in case of severe Night sweat and potential cancer symptoms:

A doctor should be consulted as soon as you get to known about your severe Night sweat.

An important point that should be noted before all the curing and medication process that Night Sweat can be very specific as well as common disorder amongst the patients depending on the proper diagnosis process.

It can range from a natural side-effect of menopause which declines the hormonal levels to a symptom of cancer.

Diagnosis involves overall scanning of the body. A doctor must go through the detailed medical history of an individual and send him for various tests such  as blood test, imaging test ( X-RAYS, and CT scans ).

Natural Ways To Treat The Problem

1. Sleep In A Cooler Environment

As mentioned earlier, night sweating may happen because of the surrounding environment.

Use lighter, breathable, non-synthetic night clothes and sheets which would not trap warmness of the body rather let the air flow.

2. Apply Good Quality Antiperspirant To Some Parts Of The Body

Body parts that happen to get most sweaty such as underarms, hands, feet, chest or groin.

This can provide more than needed warmness and let the body warm during sleep.

4. Sleep In An Air-Conditioned Room Or Use A Fan

Keep in mind before going to sleep that there should be a source of ventilation that keeps the room cool.

5. Practice Relaxation And Breathing Exercises In The Morning

Relaxation breathing exercises relate to YOGA which can result as important curing element.

This practice may take time but can result in wonders. Medical allopathy treatment is effective as well but has its side effects too.

Water is an integral part of our system which keeps us healthy and hydrated.

Especially in the case of Night sweat where plenty of body water gets drenched while sleeping.

Exercise should be an important routine for a human body though in this competitive world where people don’t have any time should positively exercise for at least 15 minutes every day.

Exercising improves the immunity and overall hormonal balance of the body. Other than benefits against any disorder, exercising has its numerous good points.

Keep the following points in mind while suffering from acute night sweating :

This would maintain the water level of the body.  And prevent it from getting dehydrated.

Night Sweat can be a strong symptom of cancer and should be checked by a medical practitioner as soon as discovered. Reading the article you may have understood the difference between ordinary sweating because of hot atmosphere and unusual drenching of bed sheets because of sweating.

So, take care of yourself and abide by some instructions and remedies mentioned above. This would surely remove the problems.

Everything That You Should Know About Night Sweats In Men

Is It Normal To Have Night Sweats Before Your Period?
Natural Herbal Remedies To Reduce Excessive Sweating
Close

Is There Actually A Cure For Hangovers? This Is What I Found Out.