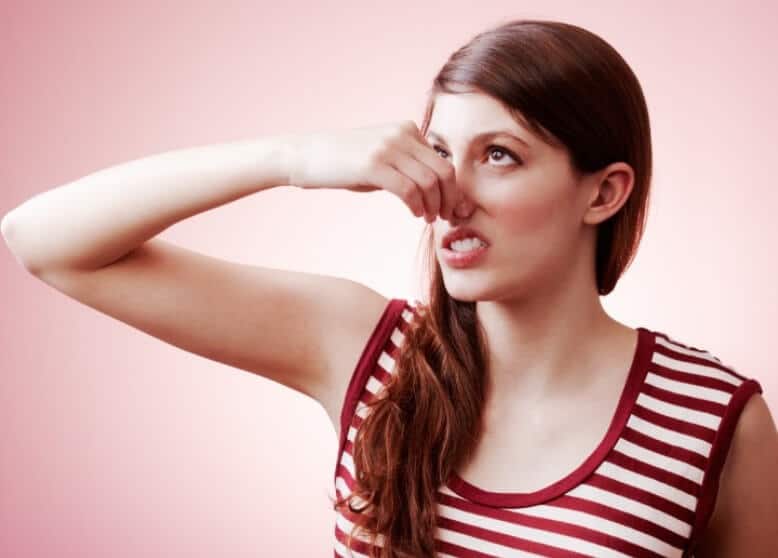 Sweat, in general, doesn’t smell. It is a clear, odorless liquid consisting of water, salt, proteins and oils. So, it is not the sweat that smells but it is the smell of your body referred to as body odor.

Your body is a home to thousands of good bacteria’s that act as a defense system of the body. These bacteria’s survive and grow in various body areas like the armpit.1 Further, these bacteria’s live on the sweat to metabolize it and release some byproducts like onion, cheese, and vinegar.

Thus, the body odor is caused by these byproducts of bacteria’s which is a natural body process. And this, is often referred to as sweat smell.

So, if you are someone whose sweat smells like vinegar then, you should find out ways to neutralize the body odor instead of considering sweat as the culprit.

Propionibacteria is the common cause of a vinegary odor. They are one of the many types of bacteria present in your sweat glands.2

Propionibacteria like many other bacteria’s present on your body has a sweet tooth. Monosaccharides (simple sugar) act as a basic food source for such bacteria.

They break down this sugars by a process known as cellular respiration.3 Depending on which type of bacteria is carrying out cell respiration, this process can be termed as Aerobic (oxygen required) or anaerobic (oxygen not required) in nature.

Those bacteria can also break down amino acids present in your sweat. All these bioconversion reactions lead to the production of different types of byproducts. One such byproduct produced by them is Propionic acid.

This is the reason for your vinegar (acetic acid) odor. So, propionibacteria overgrowth or excessive activity is one major cause of the vinegary sweat smell.

The vinegar sweat smell can come from under breasts(in women), from armpits, behind the neck, between the thighs, etc.

As established above, bacterial activity is the main culprit in your vinegary odor. So. the reason for their overstimulation can be because of various factors.

Listed below are some major factors contributing to over-expression of bacteria’s activity to cause an acetic body odor:

It is a prominent explanation for the occurrence of overactivity of bacteria. Sulfides and other organic compounds containing food in your diet are responsible for vinegar like foul sweat odor.

For instance, you must have noticed stinky mouth breath after eating garlic. This is because they contain allicin which has its distinct odor. Along with that, allicin breakdown into sulfur-containing gasses responsible for bad breath.

Hence to avoid this pungent odor, you should avoid over-consumption of such food items. And if you suffer from consistent bad body odor. You should restrict the consumption of the food mentioned above items.

Sweating is a common side effect of many drugs such as Antipsychotic, Antidepressant.4 Overuse of aspirin and acetaminophen can also lead to an increase in your sweat production.

Excessive sweating provides extra food to those bacteria. Because of this, excessive byproducts are produced. Since bacteria have extra food to eat, they multiply even faster causing an increase in their number. All this cumulated to increase in body odor.

Another major factor associated with body odor is the hormonal imbalance. It is a common side effect of middle age women suffering from menopause.

This can also be observed in pre-pubescent girls due to the sudden change in hormonal levels. While it is temporary for adolescent girls, it can be prominent in menopausal women.

During menopause, a woman’s body stops or reduce the estrogen production. This causes hormone fluctuations, which are the primary reason for a change in body odor.

But Why Does Estrogen Level Matter So Much?

Estrogen hormone affects the hypothalamus. The hypothalamus is a central part of your brain that controls body temperature. When there is the high drop in estrogen levels, it sends a false message to your hypothalamus.

This message cons your brain into thinking that your body is overheated. This alerts your brain to start off the cooling mechanisms. Thus this springs your body into action, which results in an increase in sweat production and changes in body odor.

If you are menopausal women, you must have experienced this embarrassing situation. This incidence is also called hot flashes and excessive sweating.5 These are considered a common side effect of menopause.

Genetics can influence your body odor. Genetically you can be predisposed to sweat less or profoundly. For instance, if you are of East Asian descent, you tend to have fewer apocrine sweat glands. Fewer glands mean you are less prone to body odor.

Unlike genetics, you have total control over this factor. You should bath or shower at least once a day. And if you sweat profusely, then you are advised to shower or bath at least twice a day.

It will help to reduce accumulated bacteria and dead skin on your body’s surface. Dead skin is made up of keratin, a type of protein which is nothing but the chain of amino acids.

This amino acid can be metabolized by bacteria into acids contributing to vinegary odor. Thus, regular showering or bathing will help you to control your acid production.

We all know it is a glucose malabsorption disorder. As a result of this, its increases the quantity of sugar excreted. This sugar breaks down into acid and causes body odor. This is also known as ketoacidosis.6

So, if you have diabetes then there are chances of vinegar smell in your sweat.

Below are some Minor factors responsible for odor:

a) A change in weather can create more favorable conditions for bacterial growth. For instance, you sweat more in summer.

b) If you are overweight, you will sweat more even on the mild exercise like walking or jogging. Thus more prone to odor.

c) A less common condition known as hypogonadism may also play a role in your body odor. It is caused when males generate abnormally low testosterone levels.

d) It can be due to malfunctioning testicles. This show similar side effects of menopause. This includes hot flashes which increase perspiration and in turn increase bad odor.

How To Get Rid Of Sweat Smell Like Vinegar Naturally?

There are many natural remedies available in your kitchen. Those can be used for the treatment of acute or persistent vinegary odor.

Baking soda can absorb your sweat and in turn, reduce your body odor. Plus, it also kills bacteria and works like a natural deodorant.

Apple cider vinegar is a weak acid. Because of this, it renders acidic to the area applied. This acidity provides an unfit environment for bacterial growth.

The acidic property of lemon juice helps to lower the skin’s pH level. Thus making it difficult for odor-producing bacteria to survive in this environment.

Rosemary inhibits the growth of bacteria. It also contains menthol and chlorophyll, which act as a natural deodorant. It neutralizes strong body odor and also gives a nice fragrance to your body.

Rosemary also contains zinc. Zinc and Magnesium deficiency is associated with the bad odor from your body.

Note: If you experience any irritation, you should discontinue its use.

When To See The Doctor?

Often, body odor isn’t a cause of major concern. With a moderate change in your lifestyle and diet, you can overcome this embarrassing condition.

While a persistent acidic smell could be a sign of a health problem. So it’s a smart move for you to get your hormonal levels checked.

If you face a lot of problem with your sweat and even after using the remedies mentioned above constantly the vinegar sweat smell is not going, you can consult a doctor to know the exact cause behind this.

You can use a deodorant which is considered to be a very convenient option. Deodorants contain antimicrobial agents such as triclosan or alcohol.7 So they work by reducing your bacterial count.

They act by dissolving the sweat and forming a barrier over your glands. Thus they prevent a release of your sweat onto your skin’s surface. Lower the sweat, lower will be the odor.

It is a water-soluble derivative of chlorophyll. Deodorant and antiperspirants will only provide you with temporary relief. While chlorophyllin tackles the cause rather than just the symptom.

When taken internally, it will bind with various odor-causing compounds in your body. It then neutralizes them and removes it from your body.8

Hence if you suffer from persistent odor, then this is a better option for you. A recommended dose between 100mg and 200mg of per day is considered to be effective.

As mentioned above you should avoid overconsumption of sulfides and other odor-causing compounds.

Take a well-balanced diet rich in protein and vegetables. Also, reduce the carbohydrate intake in your diet. This will limit food source for those odor-causing bacteria. It will not only reduce your body odor but also provide you with better overall health and well-being.9

Along with that drink lots of water. Water has natural detoxifying properties. If you’re dehydrated, your sweat will have a more potent odor. So keep munching on lots of raw fruits and vegetables.

Wash your armpits with a mild soap and have a shower on a daily basis. Because poor hygiene will only aggravate this condition.

Pungent Body odor is an easy task to address and not a major issue. You can easily get rid out of this by using some home remedies and maintaining a proper hygiene level.

But if it is persistent, it can be an indication of the major underlying issue. So don’t ignore persistent bad odor and don’t try to mask it. Such attempts can and will only worsen the situation.

In such condition, you should consult with an experienced medical professional. They will help you to overcome this problem. And it will also make you feel healthier and enjoy a higher level of self-confidence.

18 Proven Benefits Of Drinking Milk And Honey Together