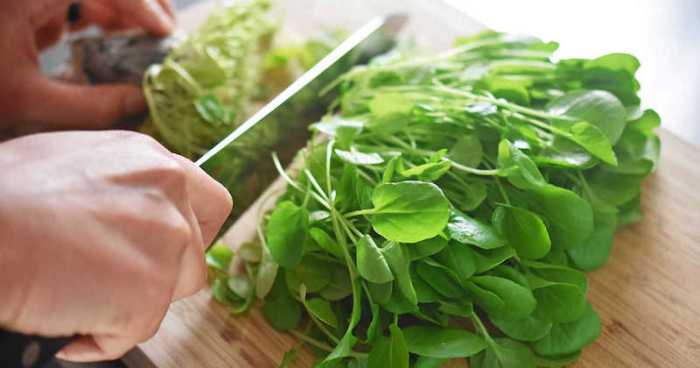 All of us know the benefits of green leafy vegetables in our diet. One such lesser-known green vegetable is watercress. It is the powerhouse of nutrients and a remedy for multiple chronic illnesses.

Watercress belongs to the same family of cabbage. It is often used in medicines. To know more about this deliciously nutritious herb scroll down.

Watercress is an aquatic plant found near springs and slow-moving water streams. It is a leafy green vegetable known to be a close cousin of kale, cabbage, and arugula.

It bears small round scalloped leaves which in the summer season produces white flowers with that later turns in to small pods. These small pods contain two rows of edible seeds.

Watercress is a perennial plant growing only along the running waterways. It has a preferred pH range of 6.5 to 7.5. The vegetable can grow in varying soil conditions as long as the soil remains saturated with water. Alternatively, if you love to eat watercress, you can even grow it in a bucket or a pot by maintaining the saturated conditions.

The flavor of watercress tastes best during the cooler parts of the year, thus making it a winter vegetable. Once the plant blooms, the taste decreases.

The leaves and the shoot are used for the medicinal purposes. For eating as a food only the leaves are used.  You can even find it any grocery store.

Watercress is widely grown in Europe, Central Asia, and America. It is used there as a medicine and food source. People generally use it in salads, team it with stirfry vegetables, or make a soup out of it. The leafy part is consumed, the roots and fibers are discarded.

However, as it grows in water it should be washed thoroughly than soaked in hydrogen peroxide water for an hour. This removes pollutants, parasites, and impurities. To maintain its freshness its submerged in water and refrigerated.

A few of the prime health benefits of watercress are described below in detail:

A study says to eat 80grams of watercress daily to have good results. In yet another study, it was concluded that watercress has anti-carcinogenic properties which can prevent cancer of stomach, lungs, and breast.

Watercress works at cellular level too to reverse the DNA damage to white blood cells. To rule out the work, a study was done on cigarette smokers. They consumed watercress daily.

It was found that it was effective to decrease cellular damage and the cells were able to protect themselves from cellular damage. Thus, it was seen watercress for good not only for cancer sufferer but for healthy people too to keep various kinds of cancer at bay. The health benefits of watercress to prevent cancer is widely known.

Watercress has loads of vitamin C, which reduces oxidative stress caused by cancer.  It also has Folate which is associated with low risk of cancer.

A study showed daily consumption of folate for a prolonged period by women showed a phenomenal decrease in risk of breast cancer.

Consumption of folate does not pose any health risk, but in fact, acted like a potential positive receptor agent against breast cancer.

A study published in the American Journal of Clinical Nutrition says that there are isothiocyanates compounds in leafy green vegetables that possess anticarcinogenic activity.

In the study, it was also found watercress contains glucosinolates to fight against cancer cells.

Studies suggest when watercress is cooked the glucosinates in them are converted to isothiocyanates. These isothiocyanates have the anticarcinogenic effect that reduces the risk of colon cancer.

These chemical compounds when broken down protect the cells from the DNA damage by inactivating the functioning and vitality of the cancer cells. The health benefits of watercress can prevent other types of stomach ulcers, and stomach cancer too.

Minerals like Calcium, magnesium, and potassium are potent agents to bring down the blood pressure by excreting the sodium out of the body and causing the arteries to dilate. These minerals, when taken as solo supplements, show lesser effect than when taken in food.

Watercress has loads of calcium. We all know Calcium is the superfood for bone and teeth. Including watercress in your daily diet can increase the calcium levels in your body and prevent any bone-related problems. Calcium is effective for building bones by causing an increment in the production of osteoblasts.

It is an extremely important mineral for our body to maintain its vital functioning. People after 30s tens to suffer from bone density loss.

Watercress is a good source to maintain the bone density and prevent the aging of the bones. Premenopausal women should include watercress in their daily diet to prevent osteoporosis.

More off, you can even give it to your kids to promote their bone and teeth development.

The health of bones and hair depends on the phytonutrients. When our body is deficit in phytonutrients, mineral, and vitamins it results in unhealthy hair and skin.

Watercress is one such superfood with phytonutrients and Vitamins A, C, E, K and B vitamins. So, consuming it on a regular basis can give you a clearer complexion and healthy hair.

In addition to it, it has lots of calcium, potassium, magnesium, and protein which are much needed for the health of the hair, nails, and skin.

It also has lots of water content which further expels out all the toxins from the body. So, together all the nutrients in watercress benefit you with a better health and skin.

It does so by nutrients like beta-carotene, vitamin A, vitamin C, calcium, iodine, phosphorus, amino acids, iodine, and folic acid.

These nutrients work on the body at the tissue level to eliminate the inflammation. Not only this, they are even effective against a cough, bronchitis, flu and swine flu as they can decrease the swelling in the airway passage.

During pregnancy, the mother has to take folate supplements to prevent birth defects of the baby’s brain and spinal cord. Folate is also required for a healthy embryo and is vital for cellular division too.

It can even eliminate the pregnancy complications. Thus, for a pregnant mother including watercress in the daily diet can give a healthy pregnancy.

In neurodegenerative disorders like Alzheimer’s and Parkinson’s disease, the tissues of the brain get damaged resulting in memory loss, unclear thoughts, and decreased mental power.

Watercress has loads of Vitamin C which can slow down the occurrence of these issues. It can repair the tissue damage, clear thoughts, sharpen memory and reduce bleeding when the stroke has occurred.

Studies show in individuals with a traumatic head injury the Vitamin C concentration is low. So, it was concluded by the study that daily intake of vitamin C rich food can prevent such brain injuries.

Thus, as Watercress is rich in Vitamin C  it may benefit your brain health and play a role in neuron building activity.

Studies suggest low folate levels in the diet can be caused by excessive alcohol intake. With low folate in the body, the person can show increase the risk of depression, The folate works along with the neurotransmitter of the central nervous system and affects the way of our brain think and respond.

A large number of the population suffer from depression due to alcohol intake and low folate levels in the body. Watercress is a superfood to fight such body imbalances.

It has high folate content that can act prevent depression by replenishing the folate content in the brain. So, one should include watercress in the diet if she/he is at a risk of depression.

Thyroid glands require vital mineral and nutrients for its proper functioning. When our body is a deficit of the minerals and vitamins, it impairs the thyroid gland functioning.

Studies show that watercress has shown a beneficial effect on thyroid health. It increases the production of thyroid hormone in the body and thus improves thyroid gland functioning.

watercress works the most for thyroid when eaten raw. Cooking destroys a few of the nutrients and thus decrements the effect on the thyroid. So, if you are someone with thyroid, try to include watercress in your daily salads for maximum benefits.

Cardiovascular health is important for our health. Watercress has many secondary metabolites that prevent the occurrence of various cardiovascular diseases.

In addition to it, all the Cruciferous plants like watercress are good enough to lower the LDL or bad cholesterol in the body.

Lowering of the LDL  reduces the risk of cardiovascular diseases such as arteriosclerosis and other chronic heart diseases.

Watercress has loads of vitamin A, C,D,K, antioxidants, magnesium, and potassium to reduce the risk of heart tissue damage caused by oxidative stress. So, if you are someone at a risk of cardiovascular diseases, intake watercress in your daily diet.

Watercress has loads of  Vitamin C and is a potent antioxidant too. Doctors recommend drinking its soup when suffering from cold. Vitamin C is prescribed as an immunity-boosting agent, especially if you have repeated episodes of cold, flu, cough, or respiratory tract infections.

One way to increase immunity against a cough and cold is by consuming Vitamin C> Watercress is the best way to get loads of Vitamin C.

It has 50gm of Vitamin C in a single bunch. Hence, it is considered as a natural antidote for cold. Its daily consumption would significantly reduce the chances of repeated cold and cough.

A cup of watercress leaves have only 18 calories. It has loads of fibrous to increase the metabolic rate. Moreoff, it also helps to slow down the food cravings.

With low cravings and high metabolic rate, one will surely reduce weight. Studies suggest replacing one meal with watercress soup or salad can reduce few pounds in few weeks effectively.

Watercress is safe for almost everyone. Care should be taken while washing it. It should be washed thoroughly with water and soaked in a vinegar or hydrogen peroxide solution.

It is because watercress grows near water streams so there are chances of dust, parasites, pollutants, and allergens sticking to its leaves and root, washing it thoroughly will remove them.

In addition to it, try consuming it in intervals like if you are eating it for one week regularly skip it for 3-4 days and then reintroduce it in your diet.

This is just a precautionary step to avoid stomach upset or any kidney issues. Till now, no adverse side effects of watercress are reported.  However, studies say long-term use can cause mild kidney issues.

This is because it may lead to the excessiveness of vitamins and might disrupt the normal body functioning. Watercress is also not recommended for individuals suffering from stomach or intestinal ulcers.

Watercress is a beneficial food and is potent to act like a strong medicine when consumed on a daily basis. Eating on a regular basis affects the entire body systems, repair any cellular damage, prevents stroke, prevents cardiovascular diseases, improve bones health, and prevents cancer too.

It is like a health tonic with significant nutritional values. The nutrients in it won’t only give a good health at present but also safeguard the future health. Studies also consider watercress as a potential vegetable to fight with the age-related health issues.

If you suffer from pre or post-menopausal symptoms, eating raw watercress can help you relieve these symptoms. Thus, Watercress is a super vegetable to prevent as well as treat multiple health ailments.

Oiling Belly Button (Nabhi Chikitsa): Benefits,Procedure,How To Do It