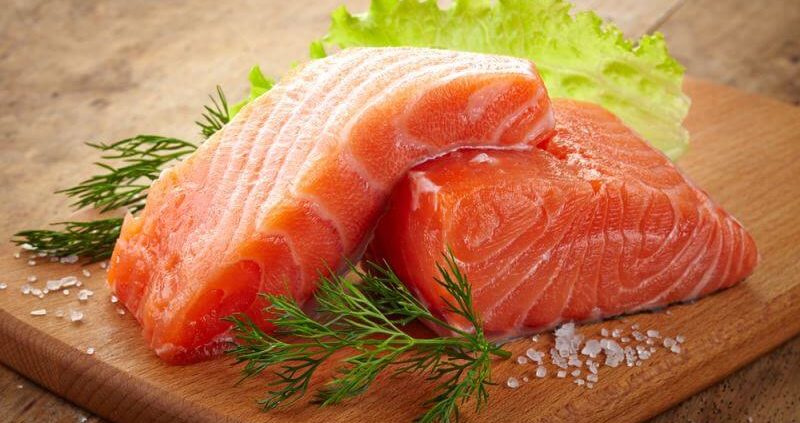 Farmed salmon is the most criticized food. These days fisheries face various problems such as overfishing, chemical and global pollution and toxic exposures. The intensive fish farming and genetic mutation makes fishes inedible.

In fact, Environmental Protection Agency (EPA) suggests that you should not eat farmed salmon. You should try to avoid it as much as possible. It is one of the most toxic food. Children and pregnant women should not consume it.

The farmed fishes of all species have an adverse effect on your health. As they are raised by giving toxic concoction of antibiotics, synthetic pigments, vitamins. Due to this, they are not suitable for eating.

A research shows that the abundant source of toxic exposure is not because of the antibiotics or pesticides, it is the dry pellets given to the fish. The pollutants found in fish feed includes the PCBs, dioxins and a different number of chemicals and drugs.

Researchers have found that manufacturers of fish food industry were secretly using an antioxidant named ethoxyquin. It is a pesticide and is secretly added to the fish pellets. Which is 10 to 20 times higher in quantity than allowed in 50 mcg per kilo food in the European Union.

In fact, this pesticide is suitable only for fruits and vegetables and not for fish farming. Research finds that ethoxyquin has the capacity to cross the blood-brain barrier and may lead to carcinogenic effects.

These chemicals lead to permanent damage to the organism and is also related to ADHD, autism,disorders of the endocrine system and immune system.

The study says that farmed salmon has a negative effect on the brain development and also affects the metabolic rate and other organs.

According to International Fishmeal and Fish Oil Organization (IFFO) the omega – 3 levels in the farmed salmon is almost half of that the wild salmon. This may be because farmed salmon now feasts on the byproducts of poultry and hog processing, canola oil, soybean and its oil, and other grains.

Furthermore, intake of more than one meal of farmed salmon in a month increases the risk of developing cancer in future. This is due to the increasing levels of antibiotics and chemicals in your body by regular consumption of farmed salmon.

According to the toxicology researcher, farmed salmon consist the largest amount of the toxins and in an incredibly large quantity. Hence he claims it to be one of the most toxic food items in the world.

Farmed salmon is about 5 times more toxic than any other food item tested. A study conducted on mice, they fed with farmed salmon and as a result, they developed a thick layer of fat in their internal organs. Also, they become obese and showed the symptoms of having diabetes.

Furthermore, genetic mutation due to the use of pesticides and mating of farmed salmon with wild salmon affects the fish’s DNA abnormally. The flesh of farmed salmon is hard that it breaks in parts when bent which is a great abnormal feature.

Moreover, farmed salmon has about 16 times higher the concentration of PCB, cancer leading chemical, from that of wild salmon. Also, the level of dioxin is higher by the factor of 11 compared to wild salmon.

World health organization (WHO) declared dioxins as one of a dirty dozen because it is highly toxic. It resides for a long time in your body that its half-life in the fat cells is about 7 to 11 years.

The list of toxins present in farmed salmon does not end here. Furthermore, the farmed fish fed by a dull gray color, a variety of the harmful synthetic astaxanthin. And no government has officially approved it edible for the human consumption. This chemical makes farmed salmon flesh of deep pink color so that it look like real wild fish.

The Nicolas Daniel’s documentary also provides the worse condition of fisheries and problems with farmed salmon. The people of Norway came to know of various chemicals that were used in the pool filled with the salmon fish.

Beneath the salmon farms dotted with the Norwegian fjords, has the layer of a waste of about 15 meters high, with pesticides, drugs, and bacteria teeming in it.

A salmon farm holds about 2 million of salmon in small space. Hence these crowded conditions result in the various diseases that spread rapidly among these stressed salmon.

According to the Oddekalv, Pancreas Disease (PD) 2, infectious salmon anemia virus and sea lice have spread all across the Norway. But, consumers are not yet informed about these fish pandemics.

Researchers from George Mateljan Foundation said that a good sized salmon farm produces excrement equal to the sewage of a city of about 10000 people.

Fish is one of the tastiest and healthiest food you eat. But in this industrial era, you should be careful in choosing the right type of fish for your meal.

Hope the above – mentioned information is useful for you.