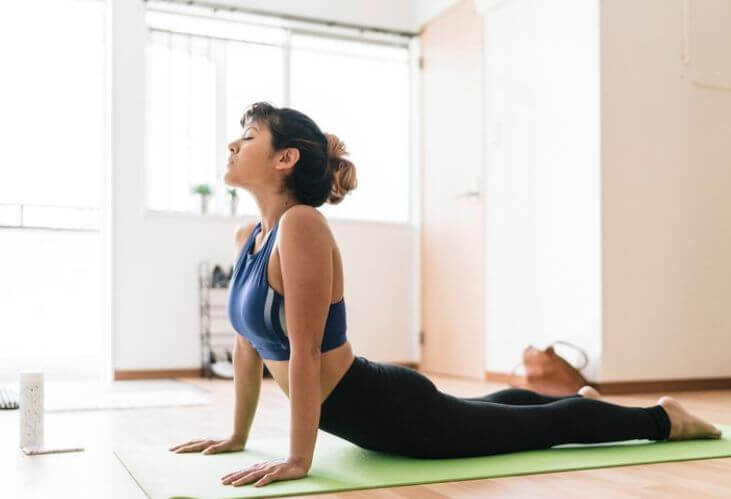 The word “yoga” is derived from the Sanskrit word “Yuj”. It literally means the union of the individual soul or spirit with the universal spirit.

Yoga is a knowledge body that originated in ancient India more than 5000 years ago, during the Indus-Saraswati civilization.

Its earliest mention is found in the oldest literature Rig Veda.

It is the pursue of emotional integration, spiritual elevation, and the unfoldment of the potentials of the mind and soul. Achieving physical fitness is just a step in this process.In this article we will read about two important and popular yoga postures namely Ashtanga yoga and Bikram yoga.

The practice of yoga exercises helps the body become strong, flexible, and better in the processes of respiration, circulation, digestion, and metabolism. They also bring about emotional stability and mental balance.

The ultimate aim of yoga is said to be self-development and self-realization.

The major benefit of yoga is that it can be practiced by any type of person regardless of the age, sex or fitness level. By a gradual work, any type of person can refine their actions and improve their practice until they achieve perfection.

Yoga In The Present Times

With the increase in the awareness of the health and the body, fitness activities and schedules have become a common part of people’s life.

In the practice of yoga, the focus has popularly shifted from the traditional purpose, which is the union of the individual consciousness with the universal consciousness. It now lies on the performance of the yoga postures (asanas) making physical fitness the ultimate aim.

The regular performance of yoga asanas has several benefits for different areas of the health, as follows:

For this purpose, there are different kinds of yoga. Practically all of them are based on the same basic yoga poses and exercises, but the experience from each of them becomes radically different with depth.

The popular forms of yoga in the present time are included under Hatha Yoga:

This is a general category of yoga. Under it come most of the yoga styles that are based on the practice of asanas (postures) and pranayamas (breathing exercises).

In this article, we will focus on Ashtanga and Bikram yoga. You can find here about their benefits, similarities, and differences to help you choose the one that suits you the most.

This is a Yoga system introduced into the modern world by Sri K PattabhiJois. This yoga style involves the synchronization of breath with a sets of postures. The result is the production of internal heat that purifies the body organs and muscles and flushes out the toxins in the form of sweat.

The benefits of this type of yoga include an improved circulatory system, a lighter body, increased strength, and calmed mind.

The learner will be instructed to perform continuous series of Ashtanga series and breath during the interchange of the poses.

The series consist of a fixed sequence of poses or asanas that are done always in the same order. The total number of series is six, and they gradually increase in difficulty.

Ashtanga classes have a fast pace but students have the chance of working at their own pace according to their comfort while being assessed by the experienced instructors.

It was founded by Bikram Choudhury and it gained popularity in the early 1970s.This yoga type is considered a literally hot form of yoga synthesized from the traditional techniques of Hatha yoga.

It uses the help of heat in order to flush out the toxins of the body, regulate body weight, and progress into the different poses.

Bikram yoga postures ensure the presence of consistency. Bikram-certified teachers that should have completed a training of nine weeks endorsed by the founder himself to hold the classes. They are encouraged to develop and deepen their skills as they teach.

Every yoga class of this type has the same conditions of temperature (40.6o C) and humidity (40%) and the same exercises, which consist of twenty-six postures and two breathing techniques performed in a preset order for ninety minutes.

The heat of the room makes the practitioners sweat and face a physical and mental challenge.

Bikram and Ashtanga yoga can seem alike at the first sight, and indeed, the benefits obtained from them are practically the same. Their similarities include:

These facts might confuse the yoga learner on which one to choose.

However, when these styles are studied in deep, there are several differences can make a considerable impact on the choice, and make it easier.

The differences between these yoga styles include:

In Bikram yoga, the practice is of a communal kind. All the people present in the class move together and coordinately as instructed by the instructor.

On the other hand, Ashtanga is considered more personal. Each yoga learner moves in accordance to his or her own breath. Although there are a number of students on the classes, the practice is at an individual pace.

All the Bikram classes follow a fixed schedule of a set of 26 poses and 2 breathing exercises. This set is often repeated twice, and there are no adjustments allowed in any case.

However, in Ashtanga yoga the class structure can consist from four to six series of sequences. In most of the cases, the class monitor instructs to perform primary series exercises, while secondary series that include challenging twists, inversions, and balance poses are uncommon and performed in advance stages.

Also, the Ashtanga yoga teacher may allow adjustments, while the Bikram teacher will not.

In both the yoga styles, the heat is an important and assisting factor. But their source is different.

In Bikram yoga, the heat source is external. It is created and developed by a technological heating system. The room temperature is kept at 40o C, and it is believed by its followers to have therapeutic effects on the body.

But in Ashtanga yoga, the source of heat is the body, and the work outs, asanas and exercises are supposed to trigger it. The heat build-up starts with a series of Surya Namaskar exercises and continues in order to gradually increase the internal fire or “Agni”.

This crucial difference often becomes the deciding point when it comes to choose between Ashtanga and Bikram yoga.

Although both types of sessions are of 90 minutes, they do not follow the same pattern.

Bikram yoga allows for short breaks as the learner shift from one pose to the next one. During these transitions, one can even drink water if it is required. These breaks are necessary due to the elevated temperature of the room.

Meanwhile, in Ashtanga yoga, the heat comes from within the body, and not from the room.

This fact makes it unadvisable to take breaks and to drink water, as they would have a reversing impact on all the heat that was built-in from the exercises, which would make them useless.

Ashtanga learners are instructed to hydrate themselves before the yoga session starts and avoid any sort of disturbance, pauses, or break in between.

In Bikram yoga sessions, the focus of the learner should be on the words of the instructor. It is an external focus point and all the students are instructed to follow it maintaining coordination in the practice.

On the other hand, Ashtanga yoga is an internal practice. The learners focus on themselves, and follow the sound of the breath and the signs from their own body more than anything or anyone that is around.

The sequences practiced in Ashtanga yoga sessions are usually designed with a healing purpose. They focus on opening the hips and making the body flexible with the help of gradually deeper backbends.

On the other hand, Bikram yoga is a more advanced style in which the backbends are designed to improve an already good health and flexibility. Many of the Bikram exercises are found to be present in the second series of Ashtanga sequences.

In both the forms of yoga there will be heat production, and thus, release of a large amount of sweat.

There are different approaches between the two yoga forms to reduce the risks of slipping or sliding due to sweat.

Although both the yoga styles advise the use of a mat of high quality, in Bikram yoga, the pupils can keep a special, large towel with them to wipe the sweat off the skin. Bikram yoga students often wear shorts, sports bra, and bathing suits for the practice.

On the contrary, in Ashtanga small sized towel would be enough, and the clothing is meant to assist the absorbance of sweat. Moreover, the students prefer clothes that cover the skin to avoid the awkwardness when it comes to perform poses that require help and contact with others.

Bikram yoga can be considered a more sophisticated, and perhaps luxurious practice. The overall atmosphere of its classes (special towers, controlled room temperature and humidity, etc.) are pre-set in an artificial way for the ease and convenience of the practitioners.

However, in Ashtanga yoga, the style is kept simple and natural. The heat source is the interior of the body, and specially designed outfits are not required.

The above-mentioned similarities and differences can help you in deciding the yoga style that is the best for your demands and preferences.

Patanjali is considered the father of Yoga. He composed the Patanjali Yoga Sutras, which contain complete information about Yoga, its origin, and its purpose.

The Yoga Sutras make the knowledge of yoga more accessible and understandable to everyone. Their description focuses at instructing how to achieve the ultimate benefits of this doctrine.

The basic classification of yoga consists of four different paths. These are:

This follows the path of wisdom and philosophy. It is based on the application of discriminative intelligence in order to achieve the liberation of the spirit.

Also known as the path of devotional bliss, this type of yoga consists in a surrendering devotion in which the individual tries to love the divinity by seeing it in everyone and in every place in a process of endless, inner worship.

It is also calledthe path of blissful action. The individual indulges in a selfless service to others without attachment and expectation of results. It focus on the consideration of God as the actual doer, and not the human.

This path of yoga is considered the greatest. It is said that it was proposed and immortalized by Bhagavan Krishna in the Bhagavad Gita. The knowledge was systematically presented in the second century B.C by the sage Patanjali. This type of yoga focuses on the thoughts of the mind and aims at conquering them.

In addition, the following types of yoga are also included in the Patanjali Yoga Sutras:

This is described as a system made of physical postures, called asanas. The purpose of this type of yoga is the body’s purification, awareness, and control of the mind and emotions. This prepares the individual for meditation.

It is focused on the conscious repetition of certain root words (mantras) that represent aspects of the spirit.

This type of yoga has the purpose of awakening the chakras, or psychic centers of the body by concentrating and arousing them. These centers have the capacity of making us connect to our intuition and help us reach high levels of consciousness.

It focuses on the activity of the consciousness in order to reach a state of complete union with it. This type of yoga creates activity to awaken the consciousness so that the faculties of the individual are in harmony and achieve their full potential.

It aims at achieving the realization of cosmic consciousness through breath manipulation and control. In this type of yoga, breathing activities will be performed as related to the natural phenomena and the activities of the moon, sun, and seasons associated to the mental and physical condition of the practitioners.

You can read more about yoga on different article of our site.

How To Heal Leaky Gut Syndrome Naturally: 10 Steps to Take

Night Sweats Among Women Below 40