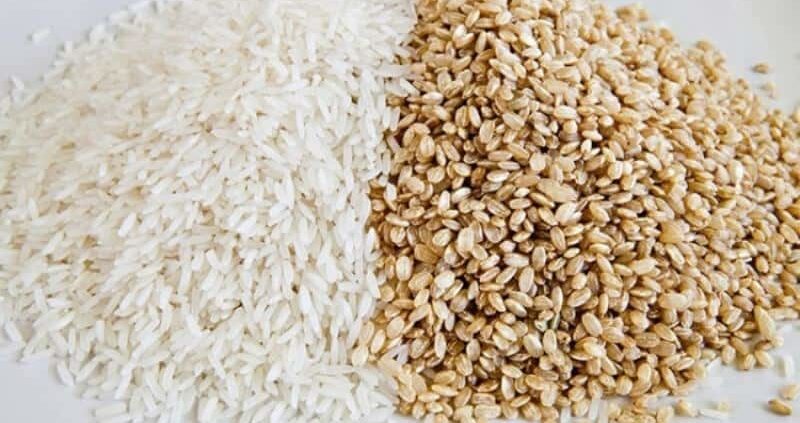 Rice is considered a staple diet all over the world. With over billions of people consuming it daily, the question remains which is better out of these two?

But before that, let us clarify the physical difference between these two rice.

It as the name says is white. This type of rice goes under heavy refining removing the bran and most of its germ content. This processing reduces the fiber contents and many other nutrients.

It then goes under further refining taking away the last layer of germ known as the aleurone layer which is packed with essential oils.

As the name says, it is brown. It is whole grain rice whose only the very first layer called the husk is removed through grinding. It remains intact with all of its fiber and germ content. Thus, having all the nutrients.

Therefore, to regulate calorie count, switching to brown rice is a good option.

While a cup of white rice contains 53 grams of carbohydrates, including less than a gram of fiber. Brown rice is a better choice as it is rich in fiber helps in maintaining bowel movements, reducing high cholesterol, and also helps in weight loss.

When it comes to protein and fats, both brown and white rice do not differ. They both have low fats, and both of them have 4.5 grams of proteins in a cup size amount.

Even though brown rice has more vitamins and minerals than white rice because white rice is a processed grain. But some varieties of white rice are packed with some minerals and vitamins as manufacturers add them to the rice while it gets processed.

White rice is a good source of folic acid.  And, both of these rice are good in B Vitamins and small quantities of zinc and iron.

1. It Is Rich In Selenium

It is very high in selenium which is an important mineral that is known for its properties of reducing the chances of developing a few types of cancer along with heart disease, inflammatory situations as well as arthritis.

2. It Is Rich In Manganese

A small bowl of brown rice fulfills our eighty percent requirement of daily manganese. It also is good for our nerves and reproducing systems. Along with this, it also helps in creating fatty acids that make up for good cholesterol in our body.

These oils which are naturally found in brown rice are healthy for our heart and also helps in reducing the bad cholesterol in our body.

4. It Aids In Losing Weight

It is rich in fiber which is good for your bowel movements. It keeps the bowel function going in such a way that leads to weight loss and good metabolism.

It also can make you feel full when you take small portions of it.

5. It Is Enriched With Antioxidants

When people think of antioxidants, they immediately think of green tea, berries, fruits, and vegetables. Little do they know that brown rice is at par with them.

6. It Is Filled With Antioxidants

7. It Is Very High In Fibre

Because of its high fiber content, it helps in reducing the chances of colon cancer. These fibers attach themselves to cancer resulting cells and other toxins and eliminate them from the body.

It also is high in fiber balances your digestion function, helps in relieving constipation, and aids in proper bowel movements.

Unlike white rice, brown rice helps in stabilizing the blood sugar levels in your body by slowing releasing the sugar in a sustained manner.

Therefore, it becomes a better choice for diabetic patients. Eating brown rice in regular periods also lowers the chances of developing Type 2 Diabetes by up to 9-11 percent.

9. It Is A Whole Grain Food

Brown rice, unlike white rice, has not been stripped down from its wholeness. Therefore, regularly eating a bowl of brown rice helps in lowering the making up of arterial plaque and also reducing high cholesterol and as well as keeps you away from heart diseases.

11. It Also Acts As An Adjunct For Candida Yeast Infections Treatment

While taking medications for this type of infection, brown rice acts as a great supplementary food given the fact that you are not allowed to eat sugary, starchy, carbohydrates containing food during this infection.

The natural property of brown rice is good for the digestive system along with its high fiber count helps in healing from candida organisms.

Along with being a nutrient-packed grain, it also tastes delicious. You can easily switch white rice to brown in all your cooking.

Based on the above information, you can see brown rice is the winner. It is a healthy choice, and you should incorporate it in your diet to stay healthy.