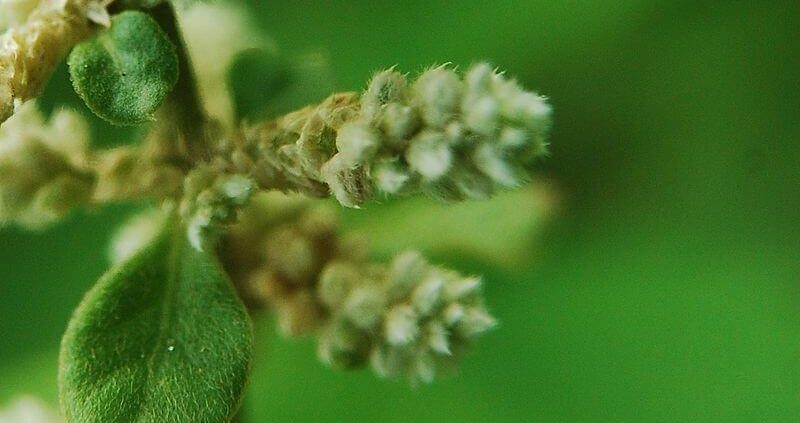 Aerva Lanata is a perennial and annual herb, commonly known as Mountain Knot Grass. It comes from the family of Amaranthaceae. It is abundantly seen and originated in India. It is mostly found in Asia, Africa, and Australia. It grows all over the year on plain lands.

This is called as Astana Bayda in Sanskrit. It has different names in different languages. It has names like Chaya, Pashanabheda,  Akopinole, Aadaanpaaki, Pulai, Konda, Cherula etc. It has a botanical name called Aerva Lanata Juss.

Aerva Lanata has a woody root structure and also flowers once a year, sometimes twice. The plant has small and simple leaves which are 1.3-3.5 cm long and 0.8-2.5 cm wide, shiny white and red at the base and has two lobes. The stems of Aerva Lanata spread in large areas irregularly which are about 1.8 m long.

The flowers are tiny about 2.5 mm long with green, pink or creamy white color and grow in clusters near the axis of stems. Aerva Lanata flowers during may and October. Aerva Lanata is rarely pollinated by insects as there is no honey or fragrance. It is self-pollinated.

The dried flowers are named as Boor or Boikallan and sold. It is one of the prominent ten sacred flowers of Kerala, named Dasapushpam.

Fruits of this plant are small and egg-shaped. Fruits have black seeds which are bean-shaped. Roots of Aerva Lanata smell like camphor. Aerva Lanata grows in the tropical climate and grows up to 60 cm. It has a bitter taste.

All parts of the plant have different uses including the roots.

This herb is also used to treat a headache, abdomen and digestion problems. It is effective for neck and back pain, fever, urine problems and also regulates body metabolism.

It is considered to be effective for hepatitis and inflammation of the liver. It is a good remedy for strangury, i.e., the condition of painful or frequent urination.

You know Aerva Lanata is believed to be a best natural medicine for Kidney stones?

It also has numerous medicinal benefits for different purposes. Aerva Lanata is used in Ayurveda for many treatments, and all of its parts are also used in pharmaceutical drugs. Use of Aerva Lanata has been recommended by Siddha and Ayurveda.