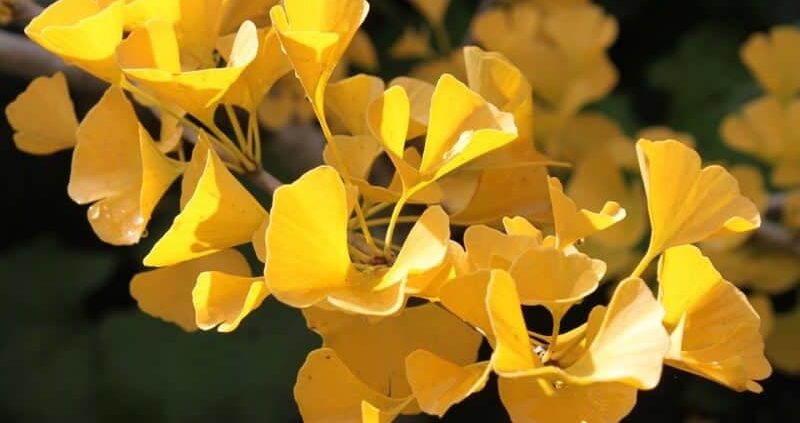 Ginkgo Biloba is also called as Maidenhair tree. It is the oldest surviving tree species on the earth.

It is said to grow 300 million years ago. It is known to be the best herbal supplement in The United States and Europe. Ginkgo is beneficial to elderly persons. This herb enhances oxygen utilization and improves memory and concentration.

It aids in the development of mental faculties. The herbal extract of the Ginkgo Biloba improves long-distance vision and protect from retina damage. It is said to treat depression. It gives relief to headaches, sinusitis, and vertigo.

What Is Ginkgo Biloba?

Ginkgo Biloba is the hardy tree. It is also known as a ‘living fossil.’This The tree is the sole survivor of an ancient group of trees. It is also said that these trees remain from the time of the dinosaurs. Therefore, we can say it is the oldest living species in the world.

A Ginkgo Biloba tree can live for 1,000 years. Its height goes up to 120 feet. It has short branches and has fan-shaped leaves. The fruit of the tree has a bad smell. The fruit has a seed inside, which is many times poisonous. The seeds have no protective shell.

The young Biloba tree has a central trunk and is pyramid shaped. The old tree oval shaped and they have irregular branches. In many parts of the world, Ginkgo Biloba is considered sacred. It is considered as the symbol of unity, invariability, and love

The different characteristics of Ginkgo Biloba are

Ginkgo Biloba has remarkable advantages. So, now let’s read about them

Ginkgo Biloba is considered as a “Brain Herb.” It is said to improve memory, thinking , nd aids to better social behavior.

Ginkgo facilitates better blood flow throughout the body, from the brain to toes. In the brain functioning, it protects and promotes memory and mental functioning.

Studies have proved that it is beneficial in the treatment of Attention Deficit Hyperactivity Disorder (ADHD).
Some studies have also confirmed that ginkgo has helped to improve memory and thinking ability in the young and middle-aged people.

Some studies have also confirmed that ginkgo has helped to improve memory and thinking ability in the young and middle-aged people.

Ginkgo Biloba notes a remarkable improvement in the mood swing.It helps people suffering from varying degrees of vascular insufficiency. It is said that Ginkgo extract prevents the need for pharmaceuticals.

Studies have proved that Ginkgo Biloba Extract has shown to enhance the depression treatments. It has wonderfully improved the condition of the older patients.

Ginkgo Biloba extracts work as an antioxidant, it combats free radicals and prevents the damage.Free radicals are unstable molecules that damage structures and cells.

They many times weaken the artery walls and results into cancer and other health problems. Ginkgo extract repairs the molecular damage; it prevents the radical damage. It blocks the tension of cancer and heart diseases.

Ginkgo stabilizes the condition of the people suffering from Alzheimer’s disease. It improves the nerve cell functions and the blood flow to the nervous system and brain. It reduces blood viscosity.

So, Ginkgo helps people suffering from Alzheimer disease.It improves their memory, helps them perform activities quickly. They experience a little feeling of depression.

Raynaud’s disease is a disease which reduces the blood flow in response to cold or emotional stress.

It many times causes discoloration of the toes and fingers. They also make nails brittle. Raynaud’s disease deprives the extremities of oxygen. Ginkgo biloba helps remarkably in this disease.

It widens the small blood vessels and keeps the spasm away from blocking the blood flow. Ginkgo Biloba can be taken for ten weeks, would give better results.

Studies have proved that Ginkgo Biloba increases the brain’s blood flow, and it allows the dopamine to circulate in the area where it is needed the most.

Ginkgo biloba helps in the treatment of impotence. Male impotence is caused due to the poor circulation and impaired blood flow through the penis.

As Ginkgo biloba increases the blood flow, it helps to treat the impotence. Studies have proved that Ginkgo Biloba has helped about 50% of patients after six months of use.

Ginkgo Biloba extract prevents blood clots and increases blood circulation to the brain; this contributes to mitigating the tension of heart diseases and strokes. Studies have proved that this herb prevents and treats the patients after a stroke.

Ginkgo Biloba extract has a unique formulation called EGB 761. It is proved that people who took this extract had less anxiety disorder. Moreover, they were able to adjust to the situations in a better way.

Ginkgo has flavonoids in it; this reduces the retinal damage. Studies have suggested that Ginkgo Biloba has not only improved the eye vision but also has preserved it.

Many people suffer from the ear, nose, and throat problems. This is often called tinnitus. This is often caused due to the blood streaming phenomena in the nerves or many times it causes muscular cramps inside the middle ear. Many patients experience pain. This problem is treated with Ginkgo Biloba, as it ensures proper blood circulation.

Many people face intermittent claudication; this is a muscle pain caused due to the decreased blood flow to the legs. People have a problem with walking and experience extreme pain.

The analysis was done and showed that people were benefited who were taking Ginkgo Biloba. They faced less pain and were able to walk properly.

Side Effects Of Ginkgo Biloba

Ginkgo Biloba extract is safe. It may cause different side effects as sometimes. Many times undesirable effects are experienced among the people who have blood circulation disorder.

a.For the people suffering from Dementia, the common dose is 40 mg to be taken three times a day.

b. For improving cognitive function, it should be between 120 to 600 mg daily.

d. People who are facing the problem of Intermittent claudication, the appropriate dose is 120 to 240 mg. Here, it can be taken for 4 to 5 weeks.

It is advised that these figures are approximate and are derived according to the research done. It is important to consult a doctor about the exact dose before you start using it.

Some Tips To Be Kept In Mind While Using Ginkgo Biloba

Now, when we have read much about the Ginkgo Herb, we can say it is a type of medicinal herb. It manages anxiety, cerebral insufficiency, dementia, etc.

It keeps your memory sharp. Today, much of the research is done on this. It is advised to use it cautiously if you are using any other medication. So start it with a small dose and see the beneficial effects.