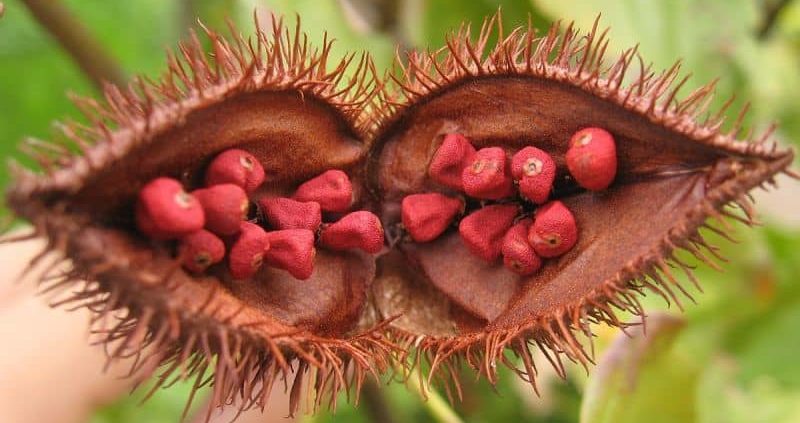 Annatto has long been used in the food industry for its rich red color. It is a natural food coloring agent with a distinct peppery taste. Annatto stands apart when compared to other artificial food coloring agents as it is the most natural way to add color to the food.

It is free from chemicals and other dangerous additives used in other coloring agents. In addition to this, it also has several health benefits. To gain more information about this natural food coloring agent scroll down.

Annatto is the seed or extract of the achiote tree. The tree is indigenous to  Central and South America. People of Latin America used it widely as a dye, medical drug, and in preparing many food dishes. It has an intense color ranging from bright yellow to deep orange. The color is similar to turmeric and paprika. Annatto is also known as urucum, atsuete, and onoto.

The achiote fruit has a heart shape and is covered with thick, spiky hairs. When the fruit matures, the pod opens revealing its red seeds. These seeds and the pulp is used for a variety of purpose. The seeds and flesh are processed thereafter to extract the potent edible dye.

The Annatto seed has carotenoids which are a strong plant pigment. You can find this pigment on the outer coating of the seed. For using it, the seeds are ground up into a powder or paste form. Besides this, you can add this to add flavor to few dishes. It will give a mild peppery with a nutty and floral scent to your dish.

In earlier days, the indigenous population of America used to use it as a body paint, sunscreen, and a natural insect repellant. Nevertheless, today it is used in food industries to add color. You can also use it when cooking food. Although it is used across the globe, it still remains as a staple ingredient in Latin America and Philippines.

Annatto has a number of health benefits. A few of them are classified below in detail.

Another study published in the  International Journal of Pharmacognosy suggests annatto extract has powerful antimicrobial properties that allow it kill many bacterial strains. Thus, you can use annatto extract not only for color but for promoting your health too.

Annatto contains a verity of antioxidants. These compounds balance out the effect of the harmful free radical build up in your body. Eliminating the oxidative stress would ultimately protect the cells from damage. More off, the antioxidants also prevent the risk of chronic health issues like cardiovascular diseases and cancer.

If you add annatto seeds to your food, your body will be enriched with antioxidants. A study published in the Korean Journal for Food Science of Animal Resources suggests adding annatto seeds to the pork patties can further increase its antioxidant activity.

Thus, you should consume annatto seeds to eliminate the oxidative stress of the body.

Annatto contains loads of tocotrienol. A tocotrienol is a form of Vitamin E that is efficient to keep your bones strong and healthy. In one of the studies done on rats, it was found out the tocotrienol in annatto can prevent the risk and symptoms of osteoporosis. Osteoporosis is a common condition that causes bones to become weak, fragile, and porous.

Although more research is required to rule out the effect of annatto extract on the human bone health. In future, there are chances that annatto would be an alternative treatment for osteoporosis when combined with a balanced diet and physical activity. So, if you are someone suffering frm low bone density, you can try taking annatto extract.

A study was done to rule out the effect of carotenoids of annatto on the liver. It was found the carotenoid bixin in annatto can prevent liver damage and prevents the oxidative stress in the liver. Still, more research is going on to rule out the exact relationship between the two. Nevertheless, you can opt annatto seed extract to keep your liver healthy.If you want to do a liver cleanse you can follow natural liver cleanse process.

The heart is the most important body organ to maintain your overall health. It pumps blood throughout your body to supply the essential nutrients to the body tissues. A research found out that the bixin present in annatto can help protect your heart and reduce the risk of cardiovascular diseases too.

An animal study done on rabbits was done for the same. It was found that bixin can reduce the accumulation of fat (plaque) in the arteries by about 60%. Not only this, it was also seen that it decreased the inflammation and triglycerides content in the body. All these factors together brought about an increase in the good HDL cholesterol of the body.

Thus, you should opt for a nutritious diet containing annatto along with a healthy lifestyle to keep your heart healthy.

Carotenoids are always healthy for eyes, they can protect your eyes against many eye-related diseases. A study suggests there is a carotenoid norbixin in the annatto extract that can effectively improve your eye health. Not only this, it is even effective to increase your vision.

Another study was done on rats in which the rats were supplemented with norbixin for three months. It was found that it reduced the accumulation of a compound associated with macular degeneration. Macular degeneration is a slow gradual decrease in eye vision. So, you can add it your food to improve your eyesight.

In addition to this, bixin was found effectively reduce body inflammation, boost skin cell growth, and fasten the healing of ulcers. it can also prevent your skin from UV radiation damage. In the beauty industry, annatto extract is used in creams, lotion, and lip balms.

On the whole, you can use annatto extract to get a nourished skin.

There are a lot of studies you must be aware of that suggest the dangers of food dyes on your health. A few of them even relate consumption of food dyes to cancer. However, all these negative effects are seen with artificial dye prepared using chemicals and harmful ingredients.

On the other hand, annatto is a food dye prepared from the annatto seed. It is prepared using a natural source so it is extremely safe to consume. However, it might have a few side-effects when taken in abnormal limits. Thus, you should take it in limited amounts to enjoy its health benefits and avoid its unwanted symptoms.

In addition to this, a few cases were also reported that suggested annatto triggers the symptoms of irritable bowel syndrome. Overall a few of the side-effects that might occur due to annatto are vomiting, diarrhea, pain, and bloating.

These symptoms are uncommon and occur only in 1 out of 100 people. For most of the people, the annatto dye is safe and does not show any side-effects. Nevertheless, if you face any negative effects when consuming annatto, immediately stop the use. Consult your doctor if required.

How To Use Annato Dye?

Annatto is an easy and natural way to add the extravagant color and flavor to the dishes. Your dish won’t only pop out but also give you the extra dose of antioxidants and health benefits. Annatto dye is an excellent alternative to chemically made artificial food dyes. it is because it keeps the adverse effects of the chemical at bay.

If you want to use it in your dishes, start with a small amount to check whether you can tolerate it or not. It can be a healthy option for you. You can find Annatto dye in many of the processed foods like ice cream, butter, crackers, salad dressings, cheddar cheese, American cheese, barbecue chicken, popcorn, bakery items etc. Annatto dye is also used in beauty products and in few of the medical pills. Annatto is used in many types of cuisines all around the world. It is widely used in Latin American and Carribean cuisines.

For using it in the food you can get the store bought annatto dye or you can prepare it using its seed. You have o ground it in a powder or paste form to add it your food.

Annatto is a purely natural side-effect free food dye. It can add color and flavor to any dish. More off, it can even give you health benefits too. The natural dye is a highly used condiment all over the world. The dye is frequently used in food industry, beauty industry, medicine industry, and paint industry.

You can use this amazing food dye to satisfy your taste buds, to garnish your dish, and at the same time to enjoy its variety of health benefits.