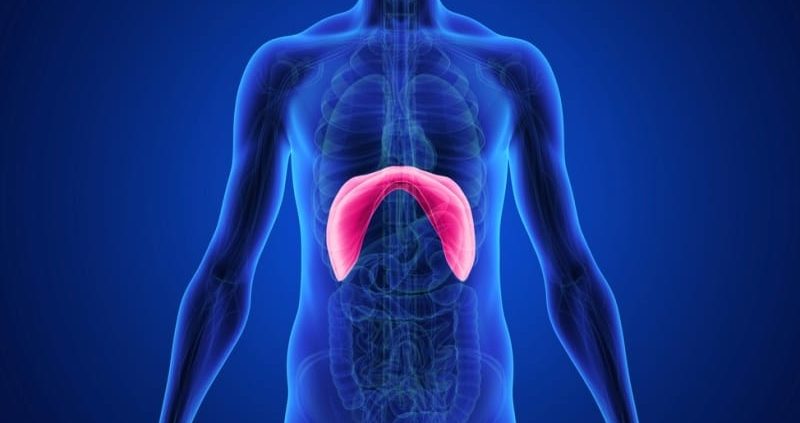 The human body functions like a programmed machinery- well planned and diligent. There can, however, be discrepancies even in the smooth functioning of said machinery.

With numerous organs in the body, certain tendons and tissues can put a particular body part out of its usual routine. Muscles are often subjected to strain and spasms. The same goes for the largest and strongest muscle in our body- the diaphragm.

The diaphragm is enclosed by the rib cage on the front, back, and sides with the stomach located under it. The diaphragm is also known as a thoracic diaphragm and serves as a divide between the thorax (chest) and abdomen.

The origins of the diaphragm are found along the lumbar vertebrae of the spine and the inferior border of the ribs and sternum.

The diaphragm is optimal for the proper functioning of the respiratory system and aids in breathing. The muscle is working continuously throughout its individual’s lifetime and is always at risk for convulsing into spasms. These spasms can be painful and can also indicate other disorders.

This occurs due to the sudden force applied to the abdomen and the solar plexus. It is a result of physical force such as blows to the torso, a fall on the back, etc.

This can lead to temporary paralysis of the diaphragm.  Transient spasms can also cause minor breathing problems. Since there is no particular treatment for these spasms, the individual will have just to wait it out.

Hiccups are a result of spontaneous contraction of the diaphragm. These contractions may occur sporadically or at regular intervals.

Hiccups are involuntary; they occur due to a reflex arc which causes forceful contractions and closure of vocal cords. As a result, the individual will make the characteristic hiccupping sound.

In most cases, hiccups subside on their own. It is possible to hasten this process by following certain remedies. If the hiccups persist for the longer duration or cause discomfort, you may need to see a doctor immediately.

This form of diaphragm spasm causes a hiatal hernia, a condition where the stomach protrudes abnormally.  In addition to diaphragm muscle weakness and strain, patients may also suffer from acid reflux, circulatory and heart problems, etc.

This disease is caused by Coxsackie B virus. It is a contagious virus and spread upon contact or exchange of body fluids. The epidemic occurs in tropical and warm regions.

Diaphragm spasms are simply a symptom of the disease. Other symptoms include headaches, fever, and pain. While Bornholm disease is not fatal, it is advised to seek medical attention when contacted by said illness.

Diaphragm spasms are often ignored or misdiagnosed. Several medicinal practitioners mistake diaphragm spasms for gastrointestinal reflux. Others even get the patients treated for heart and lung disorders; not only is this harmful but can cause more problems.

The spasms which are ignored can be an indication of a disorder such as a hiatal hernia, etc. Immaculate functioning of the diaphragm is necessary for unhindered respiratory and other functions.

Hiccups occur when the epiglottis closure disrupts the normal breathing process. The lungs struggle to inhale sufficient oxygen, and as a result short, quick breaths are taken. These rapid breaths can be a result of diaphragm spasm.

When food is swallowed, it passes through an opening in the diaphragm known as the hiatus. This way it enters the stomach. At times when the body is wracked by spasms, the food clogs the chest through that opening instead. Such strains on the diaphragm can lead to a hiatal hernia.

A hiatal hernia is often misdiagnosed. As a result stomach and cardiovascular issues occur. Moreover, this can induce gastro-esophageal reflux or acid reflux disease.

This occurs when the stomach is not in its allocated place. Due to this, the fluids do not pass through the passage to the stomach correctly, causing trouble to the diaphragm. Acid reflux occurs as a response. This condition is also known as gastrointestinal reflux r acid reflux condition.

Due to the presence of abnormally large blood vessels, namely vena cava, the blood is stopped from being returned to the heart, subsequently disrupting the circulation of blood.

Due to varied sizes and requirements of numerous organs, sometimes the heart is unable to cope and supply the necessary blood for all parts the body.

Under such circumstances, the heart will not be able to pump the adequate amount of blood into the aorta. This occurs when the heart cannot handle the pressure of surrounding organs.

All organs are needed in assisting with the smooth functioning of the body. If the necessary abdominal structures are not physiologically present, the thoracic cavity can press against the lung tissue. This causes the patient to experience short breaths and thoracic pressure.

vii. Pain and contractions in the abdomen and chest area.

viii. Constriction in the throat and chest.

ix. Tremors in shoulder, abdomen and other parts of the body.

Under certain circumstances, diaphragm spasms can lead to temporary paralysis. This occurs when the sudden force is applied to the abdomen. This could induce hiccups. It is advised to seek medical attention in case any of the symptoms persist.

A. Irritation Of Phrenic Nerves

The diaphragm is essential for the proper functioning of the respiratory system. It moves by the breathing pattern of the individual; during inhalation, the diaphragm moves down, and during exhalation, it moves up. This movement is controlled by the phrenic nerves.

Irritation of these nerves can cause the diaphragm to spasm. Hiccups coupled with short breaths and epiglottis closure may occur.

The irritation of the phrenic nerves is mainly caused by abnormalities in the stomach. The diaphragm spasms as a result and causes hiccup.

This may occur due to swallowing food in excess; foods need to be swallowed in limited and regulated quantity after being thoroughly chewed.

The stomach bloats and becomes distended as a result. The distended stomach may inflate against the diaphragm above it subsequently causing discomfort to the phrenic nerves.

Phrenic nerves can get irritated when food is swallowed with gulps of air gaps; excess of air may distort the movement of food and irritate the nerves. Intake of hot and spicy foods can irritate the phrenic nerves as well. Spicy foods must be taken in regulation.

B. Consuming Too Much Alcohol And Smoking

Consumption of alcohol in excess can always harm the body. The same goes for smoking. The overdose of either or both can induce hiccupping.

Hiccups can also be a result of overwhelming changes such as excitement, shock, stress and other strong emotions that the body struggles to keep up with.

Hiccups can also be triggered by other factors. If a hiccup lasts more than 48 hours, it is advised that you seek medical attention.

Sudden force on the abdomen can lead to strains on the diaphragm. This is why sports such as boxing, wrestling, etc. need to be practiced in an ordered environment. Sportsmen are usually at a higher risk when it comes to diaphragm spasms.

Diaphragm spasms induced by force occurs when pressure is applied to the abdomen and solar plexus region. These strains are responsible for the diaphragm spasms.

In boxing, blows on the torso can result in these spasms. This is a literal example of ‘wind getting knocked out’ from the individual.

Diaphragm spasms can also happen when we land on our back. It may result in the diaphragm experiencing temporary paralysis. In response, the body will struggle to take in the air, and the person will struggle to breathe normally.

Sometimes, residual pain may be a remnant of temporary paralysis, causing discomfort to the individual. It may continue and occur sporadically, causing the individual to struggle to execute simple action such as breathing, standing, sleeping and holding other postures.

Researchers have, however, shown that about 50% of the American population aged over 60 have suffered or will suffer from the disorder.

Another research showed that 11% of the patients who underwent cardiac surgery experienced diaphragm spasms.

The morbidity rate caused by diaphragm spasms cannot exactly be estimated. It is, however, associated with the dysfunction of the diaphragm.

If the diagnosis shows that the dysfunction is a result of irritation of nerves, a complete recovery under proper medical treatment is possible in 2 years.

i. Drugs Used Under Misdiagnosed Circumstances

Diaphragm spasms are often misdiagnosed, even by the most experienced medicinal practitioners. Due to consumption of unnecessarily prescribed drugs, the effects of said drugs can potentially harm the patient. Patients in such unfortunate circumstances often suffer from circulatory, cardiovascular and gastrointestinal conditions.

Food indigestion is a result of gastro-oesophageal reflux disorder. This case is, however, on the rarer side. To ebb the issue of the reflux, drugs are prescribed. While the aforementioned disorder is cured, the patient is susceptible to other issues.

When these drugs are taken over a long period, they disrupt the production of stomach acids. Thus, there is an inadequate production of acid in the stomach.

iii. Absorption Of Food And Nutrients

The stomach is responsible for breaking down the food so that the necessary nutrients can be absorbed by the small intestine.

Due to the diaphragm spasms that induce acid reflux in the stomach and wrong intake drugs, the food sent to the small intestine is in raw protein form. These unprocessed proteins are therefore not detected by the small intestine.

The little that is absorbed by the intestine is not sufficient for supplying nutrients to rest of the body. As a reaction to this, the immunity system breaks out in an allergic response.

Lack of sufficient nutrients can lead to the dearth of amino acid in the brain. This disturbs the production of neurotransmitters. Numerous disorders can follow this; patients are known to have suffered from disorders such as depression, anxiety, ADD, ADHD, etc.

Since diaphragm misdiagnosed so often, it is both safe and wise to conduct diagnosis for yourself. It is a simple procedure that will take only a few minutes of your time and can also treat the spasms.

1. Lie on your back on the bed or stand with your back against a hard surface, such as a wall.

2. Take a deep breath and hold it for as long as you can. Please keep track of long your breath is held. You can take assistance from a friend for this. The time should be noted in seconds.

3. Ask your partner to find a place a hand on your upper abdomen and place it right where the lower ribcages meet. Then apply pressure on the area for 10-15 seconds while you are holding your breath.

4. Time your breath again while repeating the procedure. If you are not able to hold your breath for over 50% of the previous record, there are high chances you might be at risk.

Repeating this small exercise for a week and slowly reducing the intervals to thrice a week over a period of a month can treat the diaphragm spasms. If you are unable to find a partner to assist you with the exercise, you could hire a chiropractor.

In case the patient is suffering from hiccups, home remedies can be used to cure of it.

Some of the remedies to cure hiccups include:

If the patient is diagnosed with a hiatal hernia, the treatment will be different. The stomach needs to be pushed back to its original or desired position. This procedure is carried out by a doctor. Do not attempt it in the unsupervised environment.

If the spasms persist, it is advised to seek medical help. Painful contractions, hiccups lasting over 48 hours, paralysis may very well be symptoms of a diaphragm spasm and needs to be given medical attention.