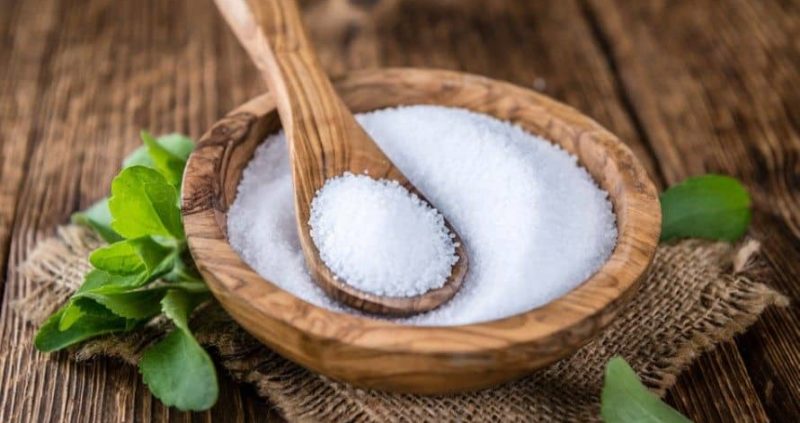 Stevia Vs Truvia?If you are confused which is a better alternative for refined sugar then you are the right place.

Before getting into comparisons, you need to know what exactly these two food ingredients are.

Truvia and stevia are sweeteners. They are a healthier option than the usual, refined sugar we commonly consume and have much fewer calories.

In this article, you can find detailed information about the trending Stevia and its extract Truvia.It also including their origin, uses, benefits and effects. It will help you compare between stevia and truvia to determine which is the most suitable for you if any at all.

Which One Is Better? Stevia Vs Truvia

Stevia is a natural sweetener that has gained popularity in recent years.

It is natural, calorie-free and has numerous health benefits. With no carbohydrates at all, stevia is approximately 100-300 times sweeter than sugar. People in South America and Asia have used Stevia leaves as a food and beverage ingredient for many years. However, not everyone around the world is a fan of its taste.

a. A Basic Introspection

Now we know that stevia is a natural sweetener, a sugar substitute. But where does it come from? It is fair enough that we get a basic profile of this plant-based ingredient.

Stevia is the name of an herbal plant. The species has its origins mainly in South America. It belongs to the family of marigolds, sunflowers, and chrysanthemums, named “Asteraceae.”There are around two hundred varieties of stevia, which grows in Paraguay and Brazil, is the most expensive one.

The name “stevia” comes from the Latinized surname “stevus.” This is derived from the name of Pedro Jaime Esteve (Petrus Jacobus Stevus), who was a famous Spanish botanist and physician in the 16th century.

Indigenous people have been using this plant for hundreds of years to sweeten drinks and medicines. Other purposes included the treatment of burns, stomach problems, colic, and contraceptive. However, it was in the 19th century that scientists began to study its properties.

The two major glycosidic components that are responsible for the high sweetness of this plant are stevioside and rebaudioside. Out of these two glycosides, rebaudioside is said to be the sweeter one while stevioside is known to have a bitter aftertaste.  Their sweetness is hundreds of times more than that of refined sugar.

For its commercialization, stevia plants are dried and made to undergo a water extraction procedure. Its glycosides are separated and purified by crystallization with the help of solvents like ethanol and methanol.

With the increase in health consciousness in the recent years, many people have started to look for healthy alternatives to refined products.

Stevia is one such alternative that can be found in the market as a sugar substitute. The most valued feature of this food ingredient is the absence of calories in it since it is a plant derivative.

In the present time, stevia is commercially available in the form of whole or crushed leaves; but its refined version consists of the isolated sweet compounds of the plant, sold as a liquid or powdered extracts. These refined stevia sweeteners do not have any similarity with the stevia plant in itself.

Stevia-based sweeteners in their powder or liquid form can be found in supermarkets, baking goods aisle or health food stores.

Stevia is currently being used as follows:

Several studies and researchers have proven the healing effects of Stevia. Some of its benefits include:

In 2012 stevioside was found to decrease body stress pathways and eliminating free radicals that led to cancer growth, primarily when used in natural cancer-killing mixtures. Several antioxidant compounds of stevia, like kaempferol, can reduce the risk of pancreatic cancer by 23%. They also prevent premature aging and cognitive malfunction.

Stevia can be a complete substitute for refined white sugar. Consumption of stevia before a meal was found to reduce the glucose and insulin levels after a meal.

Intake of stevia automatically reduces the consumption of sugar. Stevia is a calorie-free sweetener, and replacing sugar by stevia does not only reduce the sugar intake, but also the calorie intake. This helps in preventing obesity and the health issues linked to it.

Some of the glycosides of stevia can dilate the blood vessels, increase the sodium excretion and increase the urine output. The plant may also have cardio-tonic properties. All this helps in lowering and regulating the blood pressure and maintaining the heartbeat at a healthy level.

Stevia also has anti-bacterial properties when applied on the skin, preventing eczema and dermatitis.

8. Although present in small quantities in the sweetener form, stevia plant has valuable nutrients like fiber, proteins, iron, potassium, magnesium, sodium, vitamins A and vitamin C.

On buying stevia, keep in mind that the FDA has approved for safe use only its purified form, which includes: stevioside, stevia extracts, and stevia rebaudiana. Whole stevia leaves and crude stevia extracts are highly not recommended for consumption.

On the other hand, the purified forms can be safely used by pregnant and nursing women, children, allergic people, diabetic patients, and children.

Moreover, it has been shown that stevia compounds are not reactive and it is unlikely that its glycosides cause allergic reactions when consumed in food, though not impossible. Hence it is advised to consult the doctor before indulging in consuming large amounts of stevia extracts.

With a basic knowledge of Stevia in mind, now let’s move into briefly analyzing Truvia.

Truvia is another sugar substitute, and it is very popularly used in the US as such. It is claimed to be a stevia-based compound developed by the Coca-Cola company and Cargill and presently commercialized as a tabletop sweetener and food ingredient. The name “Truvia” is a trademark, and its formulations are patented.

The main three ingredients of Truvia are:

A sugar alcohol. It is the primary component of Truvia. This ingredient is present at a maximum proportion. It gives bulk and a sugary texture to Truvia, and it is made through a natural fermentation process.

A sweet compound extracted from Stevia leaves. It is also known as “rebiana, ” and it accounts for the least portion. Rebiana is just a molecule on the stevia plant, and it lacks many of the benefits that the plant provides.

Additives that are not defined by the manufacturer company.

Truvia is an artificially developed sweetener, and it is made of a blend of ingredients, and a tiny portion accounts for Stevia extracts. Truvia does not provide the health benefits that stevia does, mainly because the primary responsibility for the health benefits is stevioside, a component of stevia that is absent in trivia.

Hence, truvia should not be blindly accepted to be a “stevia-based” sweetener.

Erythritol is the essential component of Truvia. It is one of the many sugar alcohols that are naturally found in fruits and used as the alternative and “natural” sweeteners in candies and gums. They are considered beneficial due to their low-calorie contribution to the body as their absorption by the intestine is rather poor.

Erythritol, in particular, has a chemical property that makes the human body unable to break it down for digestion and is excreted through urine without undergoing any changes nor contributing any calories.

It has been observed that high doses of erythritol can cause bloating, diarrhea, cramping, and loose stool. The symptoms vary within individuals. Any possible undesired effects take place only with high amounts of consumption.

b. Benefits Of Using Truvia

Overall, Truvia is considered a safe alternative and a healthier sweetener than refined sugar.

1. It contains practically no calories: just as stevia, this could help in weight loss diet plans without sacrificing the sweet taste.

2. It doesn’t alter blood glucose or insulin levels: trivia does not cause a sudden rise in blood sugar level like refined sugar does. Hence it is recommended for diabetic patients.

3. It does not cause side effects in most people unless excessive amounts of trivia are consumed.

4. Mouth bacteria don’t react to the ingredients present in trivia and hence do not produce the acid responsible for tooth decay.

5. Reduced probability of laxative effects. This is because Truvia’s main component is erythritol, and it is absorbed by the small intestine in its maximum part.

c.  Side Effects Of Using Truvia

On the other hand, Truvia has various disadvantages, especially when it is compared to stevia.

Is Stevia Better Than Truvia? Stevia Vs. Truvia

Now that the differences between stevia and Truvia, its benefits and its disadvantages are exposed, it’s time to get into the debate: which one is better?

If we sum up the characteristics of these two healthy sweeteners, it will result in a list like this:

1. On Their Natural Properties

Stevia is a 100% natural sugar alternative, while Truvia is not entirely natural. In fact, Truvia has a larger proportion of processed sugar alcohol in it, and it may have GMO ingredients.

Hence, while Stevia is entirely natural,  Truvia can be somewhat considered a manmade product.

2. On Their Side Effects

Stevia is a natural product. As such, it practically does not suppose any harm to the human body. But Truvia is known to have a high portion of processed sugar alcohol, which on excessive consumption can cause digestive disorders.

Therefore, stevia does not have any side effects, but Truvia does.

3. On Their Health Benefits

Both Truvia and stevia have are very low in calories; they help in controlling blood sugar level and weight. However, stevia additionally, helps in regulating blood pressure, controlling cholesterol and preventing cancer because it has stevioside while Truvia does not.

Thus, we can reasonably conclude that stevia is more beneficial to health than truvia.

4. On Their Nutritional Value

As food additives, truvia and stevia are supposed to have nutrients. However, stevia has several vitamins and minerals that truvia lacks. Thence, stevia has a higher nutritional value.

Both ingredients are sweeteners, but their taste slightly differs. For those who have a sweet tooth, Truvia might be the best option between the two. Being a processed substance, Truvia is extremely sweet. Stevia, on the other hand, has a slightly bitter after-taste.

Stevia is bitter while Truvia is sweeter.

Truvia is a product that has been manufactured by the Coca-Cola Company and Cargill in recent times. On the other hand, stevia has been used for centuries, and people are more familiar with it. Stevia has a longer market exposure, and it might be costlier.

As we can see, although both of these sweeteners are of the same origin and are considered safe and healthier than sugar, there is a clear difference when it comes to the number of benefits they imply to the body.

Research is needed to officially proclaim which of these two is better. The choice depends on the preference and purpose of the consumer. However, while Truvia has a sweeter taste, Stevia has more nutritional value and is completely natural.

In fact, the exact composition of Truvia is not even disclosed yet. Therefore, health-wise at least, we could say that Stevia is indeed the best between the two.