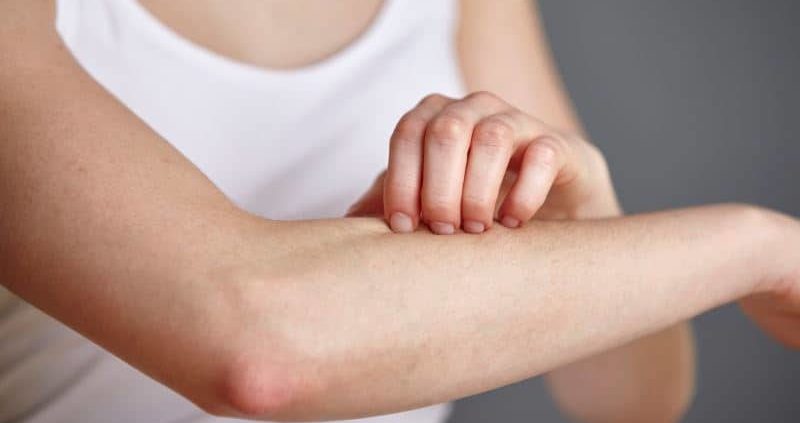 Indian fire rash(impetigo) looks like red ulcers that may differ in severity. The most affected areas are the nose and around the mouth.  The main cause of Indian fire rash is the bacteria that enter the body through scratches, wounds, and any other form of imposed skin.

Have you ever wondered what those horrible looking red sores are that sometimes appear on the nose or near the mouth?

The ones that make you want to scratch your face right off. Have you ever been worried if those blisters are contagious? Here, we answer all your questions. But first, let’s know what a rash is.

A Rash is simply a manifestation of skin that can be caused due to unhygienic local conditions.But, these are mostly harmless and in very rare cases have resulted in any severe complications. There are many kinds of rashes.

It is transmittable so if you see anyone with an Indian fire rash, avoid direct contact.

Now, before starting to discuss the treatment for the rash, let’s first understand the different forms of Indian fire rash.

Also known as Non-bullous Impetigo, it is the most common form of Impetigo. The rash starts with a little sore near the nose or mouth, which then breaks and forms a honey-colored scab due to leaking pus or fluid.

These are not painful but can be itchy. Don’t scratch otherwise it will spread the infection.

It is mainly seen in children below the age of 2 years. The rash includes fluid-filled blisters all over the body, mainly arms, trunk, and legs, surrounded by red and itchy skin. The breaking of Blisters results in the formation of yellow scabs.

The painful fluid or pus-filled sores become ulcers that reach deeper into the dermis. After they break, they get hardened and form gray-yellow scabs, which leave scars. Sometimes, swollen lymph nodes might be seen in the affected areas.

Usually, these skin infections are not severe and do not cause any complications. But in some rare cases, complications do occur. Anyone who sees these worsening symptoms in the affected person should consult a doctor immediately.

If the infection reaches a deeper layer of the skin, it can cause Cellulitis. It results in red, inflamed skin that causes fever and pain.

It is a type of Psoriasis that leads to red, inflamed, scaly patches of skin all over the body. It may occur in children and teenagers.

It is a rare bacterial infection caused by the causative bacteria Streptococcus pyogenes. It is characterized by the occurrence of pink ashes all over the body. Other symptoms include vomiting, nausea, and pain.

It is a bacterial blood infection. It is a life-threatening infection, and the affected person must be hospitalized immediately. The symptoms include fever, rapid breathing, dizziness, confusion, and vomiting.

This Impetigo complication is very rare. It is caused by the infection in the small blood vessels of the kidney which is extremely fatal.

The symptoms include dark-colored urine and hypertension. Infected person must be hospitalized immediately so that their blood pressure can be monitored.

Knowing the cause of a disease might help fight as well as prevent ourselves from the disease.

So, let me tell you the causes of this disease:

Staphylococcus aureus and Streptococcus pyogenes are the main reasons behind the Indian fire rash. They are the causative bacteria.

Skin conditions like Dermatitis can lead to this skin infection in adults. Insect bite, scratch or a cut on the skin can result in this infection among children. However, it is seen that children with no major skin injury can also be affected by Indian fire rash.

If you have any allergies that cause skin inflammation, keep in check for the Impetigo rash.

Anyone who comes in contact with the infection causing bacteria or comes near the infected area of the affected person will be soon seeing some red blisters on his/her face.

Infection can also be caused by indirect transfer such as coming in contact with the clothes, toys, bed sheets, towels, etc. of the affected person.

The Staph bacterium spreads the Indian fire rash to the surrounding skin of the infected area. The protein that holds the skin cells together is attacked by the toxin of the staph bacteria. The damage to the protein results in the spreading of the causative bacteria.

Though Indian fire rash can infect anyone belonging to any age group, mostly children belonging to age 2 to 8 years are affected by the bacteria. The main reason behind this is that children have the underdeveloped immune system that makes them more vulnerable.

If you get a scratch, the bacterium that resides outside the skin finds its way into the body which causes the Indian fire rash.

It must be noted that the Staph and Strep bacteria grow in conditions like a group of people standing close in a public place.

Home Remedies To Get Rid Of Indian Fire Rash(Impetigo)

The Indian fire rash (Impetigo)usually gets healed by the body itself within 3 to 4 weeks, but if you want to speed up the process, the following points might help:

The antibiotics and the antiseptic creams might depend on your previous skin conditions. So, consult your dermatologist before applying any one of them.

We all know prevention is better than cure. It is an old but the most effective saying. It is good for your health as well as your pocket (Well, not my pocket).

Good hygiene is the most effective way of reducing the risk of development or the spreading of causative bacteria. If you get a cut, graze or a scrap wash it immediately.

The following measures will help prevent the transfer of infection to others and also to the unaffected parts of the affected person.

So, if you or any of your family member or friend suffers from this infectious disease, try the home remedies. If the symptoms get worse consult your doctor immediately.