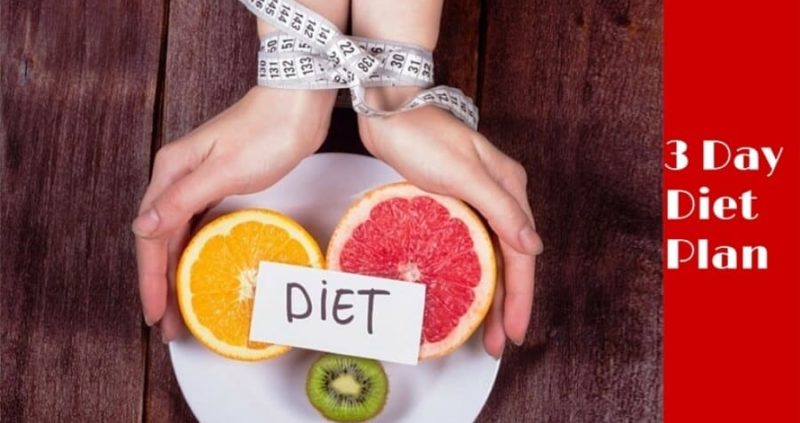 The 3day diet plan or also known as the Military diet plan is a quick and efficient way to lose weight instantly. This diet claims that if religiously followed, an individual could lose up to 5 kgs.

Also from my research, it shows that this diet should only be followed if you do not have a triggering disease as the diet decreases the calorie intake while your everyday calorie burnout remains quite the same.

This diet is low- cholesterol, low-salt and low-fat and is probably not healthy for young adults. After having said that, I will jump to why I consider this a good option for short-term benefits.

This is your answer to the prayers you had when you got a weekend beach party invite on a Tuesday. This is your key to put up a refined version of yourself out there in merely 3-4 days.

The basic good deed about this is, it has a shorter course and hence deprives you of your everyday junk only for a few hours.

However, I would highly suggest keeping hydrated and not exercising much during its course to maximize it effect and be careful not to exhaust your calorie stock before the day ends.

Also, since most of the items on the list aren’t so fancy, it makes it all the lot harder to procrastinate starting off with it.

What Kind Of People Should Go For This?

Isn’t that question a no-brainer? Everyone today is too busy to invest time and money in physical exertions ( including myself if I offended you ).

So basically, since it is a three-day thing with practically no fancy dietary dishes everyone can give it a fair shot.

Also, people who love their morning sleep too much to let go, I am slipping you the secret to making any gym savvy jealous of your frequent and less exhausted public appearances.

Having said that, I would reveal the fact that this diet has not prepared by a nutritionist as the calorie intake is surprisingly small.

And if it had been prepared by a legit practitioner, I suggest staying away from him/her for a healthy diet chart!

However as soon as you start off with this diet, I would advise you to take your exhaustion slow. Prefer trying this diet on an extended weekend so that you don’t faint from the calorie deficiency.

Also, this diet is not so vegetarian-friendly but if you try, replace the non-vegan products with calorie equivalent foods. However, spices should be as minimal as possible.

Since the intake is reduced drastically for the three days, your metabolism keeps working and ends up burning the stocked fat.

This is just a theory which has not yet been given scientific thumbs up, but since you are willing to go forth with it, I thought you deserved to know everything I knew about this diet too.

Some diet descriptions suggest that the first day only water intake is permitted and on the consecutive day’s fruits and vegetables are allowed exclusively.

However, I am going to put forward the most practiced form of the three-day diet.

You can add salt/pepper to enhance the taste but steer clear of any other spices. Also, you can increase the intake of lemon in any form you like, but keep a check on your energy level at all times as lemon juices cause weakness. Chewing of sugar-free gums is also advisable.

You can look for alternative foods with equivalent calorie intake but this is diet has guaranteed better success rate than any other alternative, so if you aren’t a vegan, try and stick to this.

What To Keep In Mind While Pursuing This Diet?

First of all, if you have the courage to go through with any diet plan, I declare you a person of much self-control, and I need to be more like you.

Secondly, since you already have shown the courage and taken the first step, it is very necessary that you keep in mind that you consume no other solid foods other than the one’s mentioned here.

For most of experts, this is not a very sustainable way of dieting and not advisable for long term health benefits. You should consult a practicing nutritionist and acquire a food chart custom made for your work schedule and taste.

You may alter your liquid intake according to your comfort but do not consume any more caffeine that already mentioned. The need to control your caffeine and sugar is dismissable during the diet.

The third day is the hardest one as you already have spent two full days on the half stomach and the third day requires you to consume least. But don’t worry, the goal is near!

What After The Three-Day Diet?

Like many of your gym routines, weight loss through this diet is often gained back faster. So even while it could help you pull off a red carpet look on the following weekend, this may render you with the same or more fat on your body by the next week.

So once you follow this diet, I suggest you continue with your normal routine and include a little more time for exercising and trying to control fat the healthy way. It is always advisable to tone down the fat rather than avoid its intake by dieting.

A Word Of Caution

I have been highlighting from the start of this article that you should not opt for this diet as a long-term substitute to exercising and burning fat.

This quick getaway can cause serious health issues if pursued for an extensive period without expert supervision. Also, women menstruation/pregnant/breastfeeding should avoid resorting to this diet as this might cause unconsciousness and also worsen body pain, nausea, etc.

Since this diet is very calorie conscious, I would advise people who are vulnerable to gallbladder stones and cardiovascular issues not to try this diet as it may only accelerate worsening of the condition.

Prefer drinking water before eating anything in the morning as well as before going to sleep. If you want to do light workout or yoga, do it on an empty stomach.

Last but not the least, ensure you get enough sleep during these three days. The sole purpose of the diet to make you look good and sleep deprived person not only obstructs good metabolism but also seems dragged out of bed. Not a fair price to pay for surviving three days on the half stomach, is it?