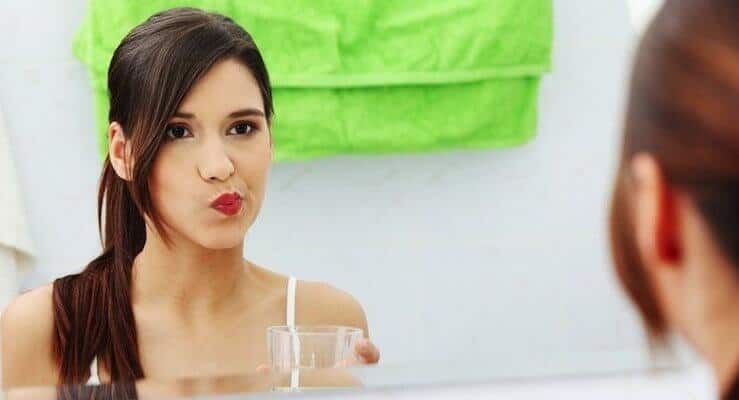 Do you read behind every mouthwash bottle for the best results?

Or what is the best toothpaste for your teeth?

There can be many ways of maintaining oral hygiene. You can rely for this on one ancient and a traditional remedy called oil pulling.

Oil Pulling ages some thousands of years back, originating in India.

Oil pulling is a process or treatment in which detoxification and cleaning of teeth and gums take place. There are lots of benefits to this, which are mentioned later.

The idea behind this Ayurvedic oil pulling is that the natural substance, especially oil is swished (Kavala Graha in Ayurveda) or held in the mouth for some time.

The time in between waking up and sleeping again your mouth is the area through which maximum harmful bacteria can enter your body.

This can result in many diseases. Thus, cleaning or pulling out of toxins or these bacteria is critical. The oil swishing technique does this.

This also improves your oral health by getting you rid of the harmful bacteria in the mouth.

It also helps in oral detoxification and cleaning, whitening of teeth, curing many diseases like arthritis, asthma, infections and skin problems, liver and stomach problems, headache or migraines and throat infections.

The list of benefits associated with this therapy too long. The oil that you use is also crucial to be thought about.

The oil should be a high-quality oil (edible). Edible coconut oil is the commonly used oil for this folk and efficient technique.

You can find the entire step-wise procedure below.

It may sound complicated as it takes out the toxins from your mouth but believes me; the process is damn simple and easy.

The entire process or the details of the procedure is listed below.

Follow the stepwise procedure and find out how easy it is.

When you get up from the bed early in the morning, do this before eating or drinking anything.

Edible oils like sesame, olive or coconut oil can be used for oil pulling.

Take 1-2 tsp. Of the oil into the mouth. If the oil has become frozen, then let it melt in your mouth first.

Now swish your mouth with this oil for around 20 mins. Give and take procedure should be adopted for around 3-4 times.

Let the oil go back and forth in between all your teeth and then throughout the gums for effective cleaning.

Be cautious about the timing. If you do it for less than 20 mins, it will not be able to pull out the toxins effectively. It’s also a problem if you do it more than 20 mins.

There is a chance of reabsorbing the toxins back into the stomach and mouth.

Till the clean and the thick oil gets thin, white, milky and consistent.

Do not gargle with this oil as you may swallow the toxic oil back into your body.

When you are done, spit it out in the toilet or the septic sink.

After completion rinses your mouth well with warm water to remove any leftover oil, even gargle and spit it out again.

You can also use a tongue cleaner for effective cleaning to remove the oil coating.

Now brush your teeth well with a proper Ayurvedic toothpaste. You can use mouthwash at the end. Preferably organic.

Repeat every day and continue this for around 1-2 months to mark the difference obtained.

This technique is full of benefits. The oil that you use has fatty acids and lipids. These things reduce the attachment of the bacteria to the teeth as well as gums.

Thus, the effect of bacteria is reduced, and oral health is maintained. Apart from this, there are many other benefits too.

Oil pulling pulls out the microorganisms from the vital organs as well as the mouth, mutants detoxifying and cleansing the whole body.

The various benefits from this remedy are as follows.

Why Should You Do  Ayurvedic Oil Pulling Therapy?

“I brush every day; my mouth is clean. Then why should I do this oil pulling?”

The answer to this question is well described below.

Your mouth serves as the gate for various disease-causing microbes or bacterias. These bacteria enter and form a sticky film on the tooth which is called plaque.

This remains on the tooth for a long time. Meanwhile, the saliva salts combine with this plaque and form a hard crust on that tooth which is called as tartar.

Tartar is difficult to remove by brushing. The bacteria in the plaques produce toxins which harm the tooth as wells as the gums. Thus pockets or gap is formed between the tooth and gums.

These pockets serve as a house for the bacteria. The diseases in which the gums get infected and bleed is called as gingivitis.

In extreme cases, the bone and the tissues that support the tooth gets damaged. In this way, the pockets become deeper and extreme gum infection takes place. This condition is called periodontitis.

This condition is called periodontitis.

Now, do you still think that your mouth is clean by brushing alone and it doesn’t need any other treatment? Think again.

This is all about the mouth. These bacteria can easily migrate to different parts of the body thus causing disease and infection. Every time you eat or drink anything. These bacteria from the pockets get into the body along with the thing that you ate.

These bacteria from the pockets get into the body along with the thing that you ate.

After entering these bacteria produce the toxins like exotoxins and endotoxins. These bacteria are difficult to handle even with the immune system or the stomach. Thus they enter into the bloodstreams and pollutes it.In this way, it affects the whole body.

Killing these bacteria in the mouth is very necessary. Brushing, flossing or even mouthwash cannot take this bacteria out of the pockets.

So to pull these microbes out of their houses oil pulling is needed. This Ayurvedic oil detoxification technique maintains the oral hygiene and also protects the body from many diseases.

How Does This Technique Work?

Oil pulling works following a very simple technique that is quite easy for you to understand.

The oil that you use is edible oil which has antibacterial and anti-inflammatory properties. When this oil is kept in the mouth, it mixes with the saliva and seeps into the gum pockets. This oil directly reaches to the bacteria there.

By swishing and pushing the oil in your mouth, it pulls out the bacteria from their hiding places meanwhile also pulling out the toxins from the saliva.

After effective cleaning for around 20 mins. The oil full of toxins become thick white and milky. This oil is then flushed out. Thus detoxification is done efficiently.

What Type of Oil Should You Use For Oil Pulling?

Which oil to use?

There are so many options.

Oils like sesame oil, olive oil, ghee or coconut oil can be used for this technique. Today even sunflower oil is an alternative.

When you wish using the sesame oil, it produces soap-like an effect in the mouth due to the saponification process of sesame oil. Even sesame oil is relatively richer in omega six oils and doesn’t taste good too.

Therefore coconut oil is superior to sesame in taste as well as properties. Coconut oil is anti-inflammatory and anti-bacterial too.

The clove oil is ideal for gums, dental pain, and mouth ulcers.

According to some research, the natural coconut oil is treated by the enzymes which break done the fatty oil into acids. This enzyme-treated coconut oil restricts the growth of various Streptococcus bacteria which is responsible for the tooth decay due to the acid produced.

Coconut oil is the only oil which can remove the above-stated bacteria efficiently.

Is Oil Pulling Right For You?

Oil pulling is completely harmless, whatever your age may be. It only involves swishing of oil which is then flushed out. Thus it’s very easy and effective detoxification technique without any majors side effects.

Let me know how you feel after you have tried this for a while.

Ayurvedic Self Massage “Abhyanga” To Rejuvenate Your Skin

Oiling Belly Button (Nabhi Chikitsa): Benefits, Procedure,How To Do It

Oiling Nose (Ayurveda Nasya) : Benefits,Uses,How To Do It